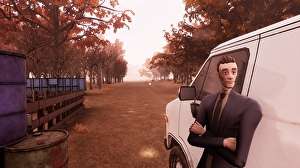 I keep finding myself describing games in terms of “texture” at the moment, and I keep worrying that nobody knows what that means – I’m not sure I know what it means, so I wouldn’t blame them. But I know it’s there, and I know a game’s texture matters, but how to spell it out?

Maybe the best explanation is by example, which in this case is Adios. Adios is not a long game, and being of limited scope and budget it’s not particularly grand, either. You’ll probably finish it in one sitting, clocking in at less than two hours, and what you’ll do in those two hours is simple: you walk, and talk, and just live a day in another life.

This is the magic of it though. Adios is just a story. There are little activities along the way – throwing horseshoes, catching fish, shooting clay pigeons – but little more, and they’re of little consequence, success or failure of little relevance to why those activities are really there. There are no puzzles or action, or even mysteries to untangle, and so the joy of it has to come from elsewhere: from the rare source of relinquished control – agency that’s sacrificed, as opposed to worshipped, allowing you to simply suspend belief and float.