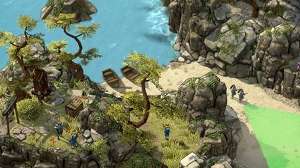 Developer Mimimi Games’ superb stealth tactics game Shadow Tactics: Blade of the Shogun is getting a standalone expansion. It’s called Aiko’s Choice and is coming to PC later this year.

Aiko’s Choice returns players to gorgeous Edo period Japan, giving them control of kunoichi adept Aiko – one of the protagonists featured in the main game – alongside her playable assassin pals, each with their own unique skills sets.

Stealth is once more the order of the day and players will have a range of tools at their disposal as they assist as Aiko in her quest (which can be tackled across three difficulty settings) to hunt down a vicious enemy from her past.