While analogue control is the preferred means of interacting with console games in 2020, there are many cases where good, old-fashioned digital input is still best. Whether it’s a game like Tetris which requires responsive control in the four cardinal directions or a title like Street Fighter II which simply calls for a nice big stick, there’s definitely a market for controllers which deliver the kind of interface you’d normally associate with coin-ops of the ’80s and ’90s – and 8BitDo, that talented purveyor of quality third-party accessories, has come up with one of its most accomplished products yet to scratch that very itch.

8BitDo already services the needs of retro-savvy players with its exhaustive range of wireless pads, many of which take inspiration from the classic controllers of yesterday, like the SNES pad and Mega Drive six-button controller. The 8BitDo Arcade Stick is a somewhat different proposition, aimed at the more discerning player who thinks nothing of dropping over $100 on a premium digital controller for use with fighters, shmups and other classic arcade genres.

With that in mind, the 8BitDo Arcade Stick is more expensive than its typical products, costing a whopping $90 / £80. However, in terms of design and build quality, it’s arguably a step above what the company normally produces. It’s a heavy beast, which means it stays put during frantic play (the big rubber pads on the base certainly help in this regard, too). The microswitched stick is lovely and responsive, too, while the big, chunky buttons feel great – even under rapid load, they perform admirably.

In short, the 8BitDo Arcade Stick feels just as good as any other stick we’ve used over the years (it compares very favourably to the official Dreamcast arcade stick, a perennial favourite of ours), but if you have any issue whatsoever with the parts used here, the good news is that you can swap them out easily for other components that are more to your personal taste. The stick’s moddable nature means it can, in the words of 8BitDo, support “virtually every arcade stick ever made”, including those manufactured by the legendary firm Sanwa, whose products are considered by many to be the gold standard when it comes to this kind of thing. Don’t like the fact that the stick has square gating for directional input? You can change the joystick mounting plate for a different shape, such as a hexagonal gate, which gives you more distinction between directional inputs (although we have to admit, the square gate the stick ships with is perfect for fighting games that call for smooth, flowing directional inputs).

The 8BitDo Arcade Stick is positively festooned with switches and buttons, and comes with a bunch of cool features which really make it stand out. Support for X-Input and Switch is included, and you can toggle between the two using the mode switch found in the top-left corner of the stick. In a neat touch, switching between the two causes the red light-up symbols next to each button to change, as the layouts are different on Switch and X-Input (which typically mimics an Xbox 360 controller button configuration).

Another switch allows you to tell the stick to act as a left-hand analogue stick or the D-Pad, which is handy for those Switch titles which map directional control to one or the other, but not both at the same time. You can also tell the stick to map the control of the right-hand analogue stick, too, although this is something we’d imagine you’ll use very rarely, if at all. There’s also a rapid-fire option for all of the buttons – which, we should note, can be totally re-mapped using 8BitDo’s “Ultimate” computer-based software program. You can even create special macros which combine button and directional inputs and map these to two special buttons for easy access. Out of the box, there’s no screenshot button for grabbing screens and video on Switch, but you can use the aforementioned Ultimate application to add that function to the Turbo button, if you so wish. 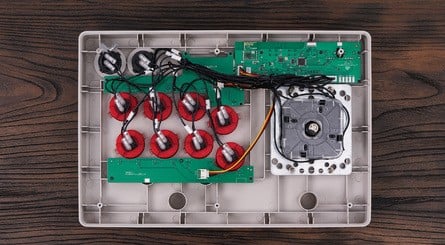 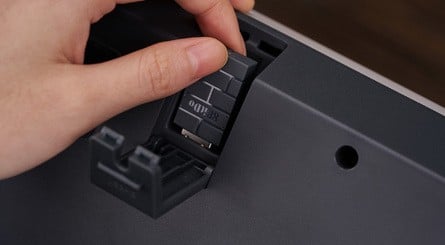 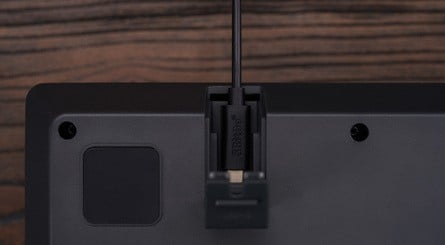 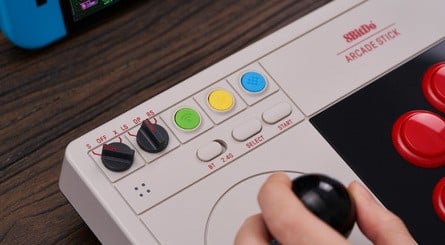 The stick supports both wired and wireless connections, with the latter coming in both Bluetooth and 2.4g varieties. Bluetooth is supported without the need for any additional gear, but is subject to a higher degree of input latency. Having said that, we didn’t notice any real difference between the latency of this stick and that exhibited by the Switch Pro Controller, so you’re already happy with the kind of responsiveness you get from that product, you’ll be pleased with how the 8BitDo Arcade Stick performs. However, if you’re especially picky about this kind of thing – and plenty of people are – you can use the bundled 2.4g USB wireless dongle, which is stowed away in a handy compartment located on the top edge of the stick. Plug this into your system of choice and you’ll be able to enjoy what should be, on paper, a ‘faster’ connection than standard Bluetooth.

If you’re a real stickler for avoiding latency, then you can, of course, use the USB wired connection, which is supported by the bundled USB to USB-C cable, which is impressively long – certainly long enough for us to sit on the other side of the room, some way away from our TV and console. When using this method, you obviously benefit from endless battery life (well, duh), but if you choose to play wirelessly then you’ll be reliant on the stick’s 1000mAh Li-on rechargeable battery, which is good for around 40 hours of play time when using the 2.4g dongle, and 30 hours when using Bluetooth. To fully charge the battery, you’re looking at around 4 hours.

It goes without saying that the 8BitDo Arcade Stick isn’t going to suit every game; without any form of analogue input, it’s hopeless for many of the most notable titles on Switch – but if you’re a fan of the multitude of one-on-one arcade fighters, belt-scrolling brawlers, shmups or old-school 2D platformers which are currently available on the platform, then we honestly don’t think you’ll find a better (or more versatile) option on the market right now. This is a controller which is serving a niche, for sure, but we can imagine it becoming utterly essential for old-school gaming fans regardless.

The 8BitDo Arcade Stick was supplied by 8BitDo for the purposes of this review.