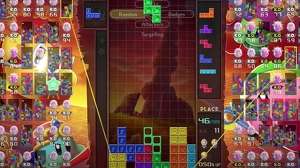 Fans of Nintendo’s beloved suction bauble Kirby might want to hop onto Switch’s brilliant block-busting battle royale game Tetris 99 this weekend, as there’s a new themed inspired by the pink one up for grabs for a limited time.

The freebie comes via the latest (and 19th, if you’re keeping tabs) instalment in Tetris 99’s irregular series of Grand Prix events, with proceedings already underway and continuing until 6.59am UK time on Monday, 12th January.

In order to unlock Tetris 99’s new Kirby theme – inspired by last year’s Switch release Kirby Fighters 2, and viewable in the video below – players simply need to accumulate a total of 100 points by battling it out in online games.