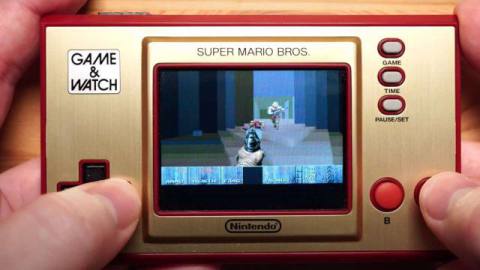 Nintendo’s new Game & Watch handheld was pulled apart in pretty quick order, with hacker stacksmashing digging deep into the system’s code before it even officially launched.

The same hacker has been busy in the days since, and, alongside fellow coder Konrad Beckmann, has been able to dump the stock firmware, despite the security put in place by Nintendo.

Efforts to hack the system further are ongoing, but there are limitations – the Game & Watch: Super Mario Bros. has just 128k of SRAM and 1.3 MB of external RAM, and there’s only 1.1 MB of flash memory for storage.

Despite these limits, stacksmashing has been able to answer the call of the internet and get id Software’s DOOM running on the system. Sure, this is a stripped-down version of the game with simplified textures and the memory allocation rewritten, but it proves it’s possible – and it will be interesting to see where hackers take this system next.