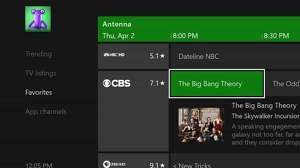 Part of its positioning as the “one” device you’d need connected to your telly was its ability to act as a TV pass-through, so you could hook up your cable box or your USB TV tuner.

Thankfully, all of that went away very quickly, along with many of the Microsoft execs who thought it was a good idea. But one element has remained until now: OneGuide, Xbox One’s TV listings app.