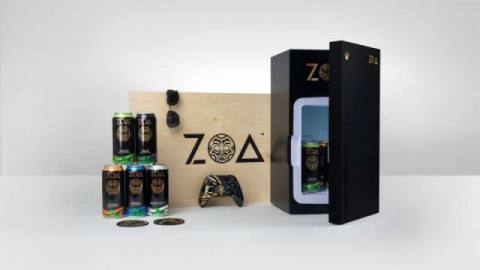 Do you smell what The Rock is…er, drinking? Because the wrestler-turned-actor is teaming up with Microsoft once more for an energy drink promotion and a free Xbox mini-fridge giveaway.

We shared a video of the Xbox mini-fridge in action yesterday, and now Microsoft is showing off exactly what the meme-fueled creation is for. In a new video, seen below, Microsoft shows off ZOA energy drinks for a healthier alternative to getting that brain spark back. In the video, Dwayne “The Rock” Johnson can be seen opening up his brand-new Xbox mini-fridge while talking up the vitamin-enriched beverage:

It’s kind of poetic, if you think about it, having The Rock lead the latest promo given his history with the company. He took to his own Twitter to share a less edited video with the added caption reflecting on his history with Microsoft. “I helped Bill Gates launch the first Xbox,” his tweet reads before introducing the latest project he is a part of regarding the brand. With the tagline of “power up your gaming,” the latest partnership is less of a focus on the cool fridge giveaway and more on advertising ZOA; an energy drink made by himself, Dany Garcia, Dave Rienzi, and John Shulman.

This is for all my gamers & creators!🔥🎮 I helped @billgates launch the 1st XBOX & now it’s a pleasure to partner w/ @xbox to create the MOST ELECTRIFYING kit to power up your gaming skills you’ve ever seen! Sip your ZO…now let’s GO! @ZOAEnergy💥#BelieveAchieveRepeat 👊🏾 pic.twitter.com/N2p6ygcL9C

ZOA is a blend of green tea and green unroasted coffee and boasts “superfood” ingredients like camu camu and acerola. It comes in the original flavor, as well as lemon-lime and orange varients. To enter for a chance to win a package filled with the ZOA energy drink and a special-edition Xbox Series X controller and mini-fridge, you can check out the official sweepstakes post right here.

So? Do you smell what The Rock is drinking? What do you think about the ZOA x Xbox collaboration? Sound off in the comment section below! If only to tell me that my jokes are bad.