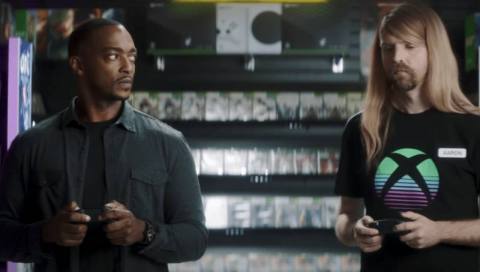 Sam Wilson (a.k.a. Falcon) returns in the upcoming Disney+ series The Falcon and The Winter Soldier on March 19, and Marvel and Xbox are celebrating by teaming up to show actor Anthony Mackie how it’s done. You know, since he was booped out of literally existing for five whole years.

The question of “Where the hell is Bucky?” is answered once more when the Winter Soldier and Falcon team up for the new show, but a shiny new television series doesn’t equate to “getting gud” in games. In a playful new promotion for the upcoming Disney show, Sam Wilson wanders aimlessly into a game store with money in his pockets and five years’ worth of life missing. When he approaches a familiar face in the store to ask what he’s missed out on, a conveniently perfect advertisement for the Xbox Game Pass comes into play.

On March 19 there will be another Falcon experience on Xbox Live and it will include the chance to earn 100 Microsoft Rewards points for those that download the Disney+ app through Xbox. To get this offer, it will be available from March 19 to March 22! You can learn more here.

There was another video added in the latest Xbox Wire blog post, which can be seen below:

With the new series on the horizon with Falcon front and center, Disney+ continues to kill it in terms of content. With even more Star Wars experiences on the horizon and the conclusion of WandaVision, it will be interesting to see how this particular streaming service continues to evolve.

Thoughts on the Marvel and Xbox crossover with the above Falcon promo? Sound off in the comment section below!