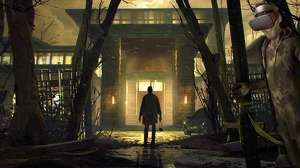 Wraith: The Oblivion – Afterlife is shaping up to be quite an underwhelming trudge through a beige world that’s full of beige horrors and beige gameplay mechanics.

Billed as a ‘horror exploration game’, Wraith: The Oblivion – Afterlife is light on jump scares and heavy on those most boring of VR moments – the ones where you just have to stand around and twiddle your thumbs while you listen to other people explain the story to you.

I recently played a preview demo that covered the first 20 percent of the game and during that time I encountered the bare minimum in terms of frights or interesting puzzles. I did however do a lot of walking through sparsely decorated and barely interactive locations with my arm outstretched like a half-arsed zombie looking for brains.