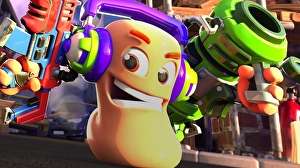 Worms Rumble reimagines the turn-based classic as a real-time arena shooter. It’s arcadey and colourful and extremely brisk. I would love to tell you that this is the definitive Worms Battle Royale, but so far Last Worm Standing is actually my least favourite of the three modes on offer. Nonetheless I guess that’s the pitch.

It’s 32 players blasting each other to pieces in surprisingly expansive 2D environments with lots of architectural complexity to balance the fact that there are so many people packed in there together. There are shopping malls and underground stations with working trains. There are vents and elevators and secret areas, which are covered to the player until you head inside yourself – which could mean a nasty surprise. You spawn with one of a handful of weapons but there are plenty of others scattered around. This is Worms so there are rifles and shotguns, but also bazookas and the infamous Holy Hand Grenade. The baseball bat is there for melee.

Death Match is where it’s at if you ask me: a clock ticks down while you die and respawn and die again, grabbing gear from moment to moment, maintaining the perfect two-weapon loadout, and finishing off as many other worms as you can. The weapons are extremely unbalanced – basically give me a bazooka and I’m a king for the next thirty seconds, and thirty seconds is a long time in this game – but this is a comedy affair as much as a precision shooter. It is hard not to have fun even when things can feel a little scrappy. There are in-game events, but as far as I’ve seen nobody really pays them too much attention. The trick is to keep moving, using the roll to get out of trouble – and using it in concert with the shotgun to pull off the old Gears multiplayer dance-and-blast number.