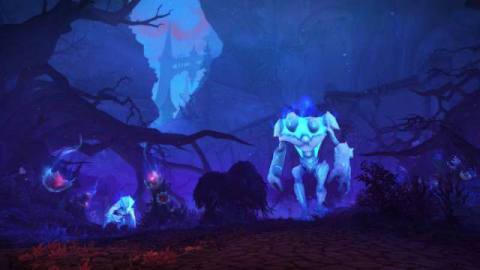 Compared to the lifespan of most games, World of Warcraft is ancient – but it’s hardly a relic. Even today, Blizzard’s MMORPG continues to keep the content flowing for players old and new. Shadowlands is the eighth expansion, and this journey through the afterlife comes with fresh features alongside systems that will be extremely familiar to veterans of the game. At the core, Shadowlands succeeds with powerful world-building fantasy, player identity, and bold gameplay elements.

Shadowlands’ premise is simple and straightforward. You invade the many realms of the afterlife to foil the plans of a mysterious arch-enemy called the Jailer. He is exceptionally boring as a villain right now, and takes a backseat to the true all-stars of the afterlife: the four distinct factions that the player explores and eventually aligns with as they reach the level cap. Making the choice to side with one of the realms comes with a ton of flavor and personality.

I aligned myself with the crushed-velvet, soul-sucking, vampiric aristocracy of Revendreth. Its gothic horror trappings, magic mirrors, and giant bats gave me a different perspective of the world than players who sided with other factions. I even got to host VIP parties to try sucking up to nobles to get big payoffs. However, my nature-loving friend sided with the gorgeous ethereal forests of Ardenweald, where they put on plays in the woods and tend gardens. Whatever your decision, it feels more like you’re becoming part of these soul societies and not just jumping on an endgame progression treadmill. There’s flavor behind the functionality, and it counts for a lot, even if you are still roaming from zone to zone completing world quests. Each dungeon has elements that can be interacted with from a faction standpoint as well; discovering I could tame the gargoyles in a Venthyr dungeon to help defeat enemies was a nice surprise.

Each zone in the afterlife is beautifully constructed and sells the fantasy well. While the sacred fields of Bastion and its angelic warriors bored me, it’s a necessary realm to serve as a foil to the darkness of Revendreth. All of the zones are impressive to view from above, and they look incredible considering how old the core of World of Warcraft is. Each zone is markedly different from the others in terms of aesthetics, personality, and feel. Blizzard takes advantage of being able to tap into heroes and villains of ages past; as this is the afterlife, it’s a great chance to bring the greatest hits from across WoW history into the spotlight. Great attention has been paid to bring forth major characters, obscure single-quest references from a decade ago, and popular newcomers like Battle for Azeroth’s Bwonsamdi.

Shadowlands serves up many staples of what is now understood to be the norm. While world quests, dungeons, war tables, and other endgame progression features are all still around with a sparkling coat of faction flavor, they don’t really alter anything in a fundamental way. Many of the quests on the way to level cap feel like stale and tired filler fare, like collecting acorns or killing fifteen cultists, with some interesting larger scale beats scattered in. However, new systems within an incredibly dangerous zone the Maw (It’s supposed to be hell) and a roguelike run experience known as Torghast make Shadowlands stand out.

The Maw is an incredibly hazardous realm that offers risk-reward balance as you hang out in the Jailer’s backyard, battling lethal monsters without any real safety net to speak of. You may even have to run back to where you die to recover some lost resources. The Maw adds some pressure and challenge to an open-zone environment, which is absolutely refreshing in a game in which it’s all too easy to end up on autopilot world quest mode while watching Netflix. Participating in Maw activities raises the ire of the Jailer, who focuses on you like the Eye of Sauron in Mordor as you slay his fiends. While it’s functionally just another way to gate how much you can do in The Maw every day, it’s again the colorful packaging that makes the difference here.

The pinnacle of Shadowlands content is Torghast. Take the variance and unpredictability of roguelike runs and do them on your WoW character, alone or with friends, in a damned dungeon tower that’s different every time. After doing a decade of dungeon runs that never change, Torghast is a beyond welcome addition. Even the greatest curated dungeons lose their luster after completing them a dozen times, so the prospect of something new each dive is tantalizing. Each run is another opportunity to try out different builds and strategies as your powerups and situations change constantly. One run may turn you into an overpowered god stacking multiple scaling sources of damage to annihilate everything in sight or accumulating enough regeneration to handle anything. Complete puzzles to open caches, rescue some companions you can take back to your hideout, run into a mimic, or slay a rare miniboss that confers special powers. The Torghast climb is great fun and quite replayable – I found myself going back in even after I had capped my rewards for the week just to explore, experiment, and enjoy.

It’s worth mentioning that the new leveling experience that rolled out with Shadowlands is excellent, allowing you to get a character leveled, geared, and into the new content in a fraction of the time it would have taken before, so you have time to learn your class easily before hitting the Shadowlands. This allows players to level up through any of WoW’s old expansions at a rapid pace, tempting adventurers to enjoy the old content whilst keeping it relevant in a new era. I leveled several characters for fun just to explore the old expansions, and it felt great to have a few more options in my stable to explore Shadowlands with.

Shadowlands plays it safe with numerous takes on established systems and structures, but lets players enjoy those features with a plethora of personality via the covenant factions and themed zones. Shadowlands also takes chances with a deadly zone that promotes teamwork and careful play alongside a fantastic roguelike run tower that’s full of surprises. Shadowlands is a satisfying addition to the annals of World of Warcraft expansions, and with a robust and revamped leveling experience rolling out with it, it’s a great time to come back to the MMORPG that made the genre mainstream 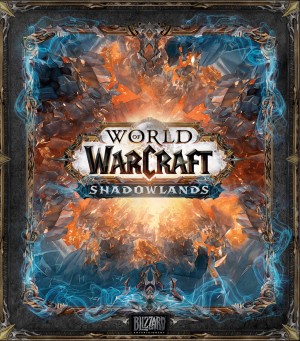 Summary: Venture to the great beyond in World of Warcraft’s latest adventure.

Concept: Save the world by entering various realms in the afterlife, meeting old friends and enemies along the way

Graphics: Breathtaking and striking environments make it hard to imagine that the game is 16 years old

Sound: The core sounds of World of Warcraft haven’t changed much, but there are always unit barks and meme-worthy boss quips to enjoy

Playability: A revamped and customizable levelling process makes Shadowlands a great time for new or returning players to join in

Entertainment: Shadowlands adds some daring elements into the mix while also retaining many of the same hooks that have kept the MMO going over the years 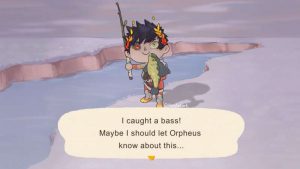