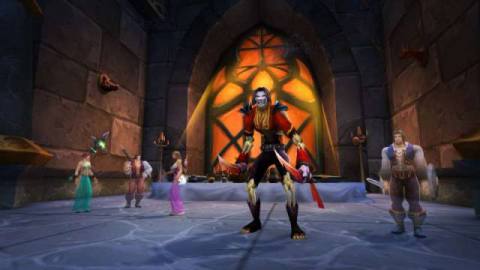 Tempest Keep. Black Temple. Karazhan. If these names mean anything to you, you might have played The Burning Crusade, World of Warcraft’s first expansion, during its epic launch many years ago. And now, the beta for the ancient expansion is rolling out now for the expansion to hit World of Warcraft Classic. I remember the night well. Three friends and I were driving around in Michigan sleet and snow back in 2007, ready to roll our brand new Blood Elves and take Azeroth by storm.

We arrived back at our apartment setup shortly after midnight and began what would be a marathon week of leveling, looting, and pizza. Okay, not a whole lot of pizza. We were pro gamers and knew that pizza is a greasy asset that only puts you to sleep, hence interfering with peak performance, we were all about the protein-packed breakfast sandwiches. But I digress. The point here is that The Burning Crusade, launch and otherwise, was perhaps the most magical moment in World of Warcraft history. Over a decade later, no experience lives up to the varied, intimate raid experience of the haunted Karazhan for me. That’s why I ask about it in pretty much every WoW-related interview I’ve ever done.

If you’ve previously opted-in or had your account flagged, you might be able to play right now, and prepare for all the leveling action through zones like Zangamarsh and Nagrand. While you’ll probably get an official-looking email to let you know that you’re in, the best way to check is to log into your Battle.net account and see if you have a Burning Crusade classic license. That way, you’re sure to avoid any phishing or scam attempts just in case they happen. There’s nothing quite like strolling into Hellfire Peninsula and being crushed by a Fel Reaver. That’s the Burning Crusade experience I remember, oh yeah!

Did you play Burning Crusade the first time around? Are you exciting to see it again? Let us know in the comments!