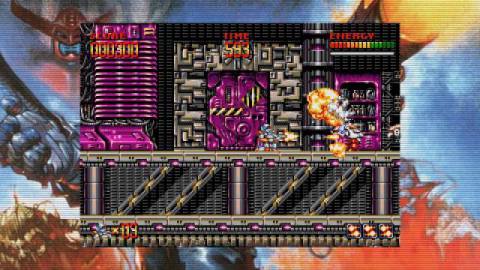 Turrican Flashback hits PlayStation 4 (also playable on PS5) and Switch today, and it’s a project well worth a look. The new collection includes four full games: Turrican, Turrican II, Mega Turrican, and Super Turrican. It includes updated visuals with numerous options to tweak things to a more nostalgic look, as well as save states and a rewind feature. It’s an ideal way to play these games, whether you’re excited about a return to an old favorite, or if you never got the chance to play these awesome games back in the day.

Developer Factor 5 would later be strongly identified with its work on Star Wars: Rogue Squadron, but the studio’s early work on Turrican (and its many sequels) is a big part of how it came to prominence.

As a side-scrolling action game, the Turrican series is lesser known than many of its contemporaries, but even a few minutes playing one of these games offers ample proof that quality was not the problem. These are stellar games that were (and are) a ton of fun. 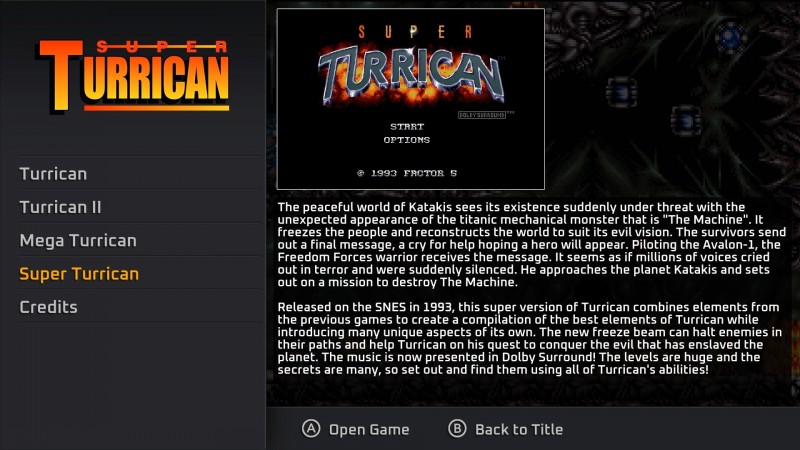 Matt Miller: Jeff, I’m excited to chat with you about these games. We both spent some time looking at the new collection. I was surprised how much I’d forgotten about these games, and how smart they are. What was your initial impression?

Jeff Cork: It had been a long while since I last thought about Turrican, honestly, and I’d also forgotten a lot about them. The boxes were a familiar sight when I was pondering what to rent at the video store. They were very cool at the time, and the art definitely helped to fill in the gap between what the developers may have had in mind versus what was actually displayed on screen. I rented a few of them over the years, and replaying some of them definitely brought me back – for better and worse. I won’t spoil your enthusiasm quite yet. What’s your history with the franchise?

Matt: Oh, totally. I remember seeing these games at the video store back in the day. I owned Super Turrican on SNES, but I remember playing the original Amiga games on a friend’s system, and just wiling away the hours trying to find secret paths and get farther.

I hear you that they weren’t all perfect, but there were a lot of things these games did right. The music is some of the best from the period, with a ton of variation in melodies, long loops, and catchy beats. The action was smooth, and the scrolling from side to side was top-notch – something that was definitely not a guarantee in games from that period. And I also just really liked the mix of Contra-esque shooting action with all the constantly changing weapons, alongside a more exploratory vibe that recalled aspects of games like Metroid. 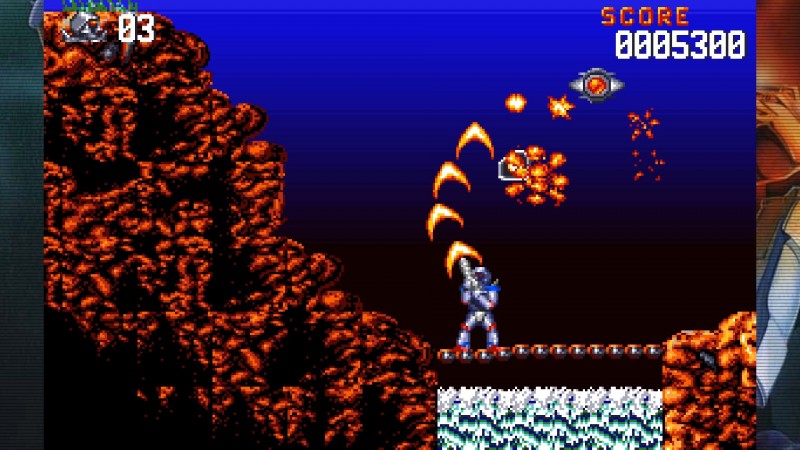 Jeff: Aha! The music is really great. I found myself just hanging out at the end of an area just listening to it loop a few times. I think you and I part ways when it comes to the exploratory vibe, though. Its level design is fairly open, with lots of backtracking and dead ends. It’s a style from that era of platformers that never really gelled with me. It’s one of the reasons why I never fully loved the Sonic games – which I’d cite as an example of a series that does those more open stages pretty well. The Turrican games make me feel lost and frustrated, not like an armored explorer who’s excited to see what’s across that next string of platforms. I will say that it’s really interesting to be able to jump between entries in the series and see how it changed over time.

Matt: Yeah, I get that frustration around the potential for aimlessness. Actually, it’s really interesting to me the way we see that aspect of things evolve over these four games. The early ones (especially Turrican II, my favorite) have a lot of branching paths, but you’re right that they sometimes dead end in weird ways. Some of the later games in this collection are more linear, but lose a bit of the sense of discovery. Regardless, there’s a quality that rewards repeat play, as you learn the different levels and their shapes, which I think really appealed to me as a kid.

What did you think of this Flashback collection, as a re-release and remaster? 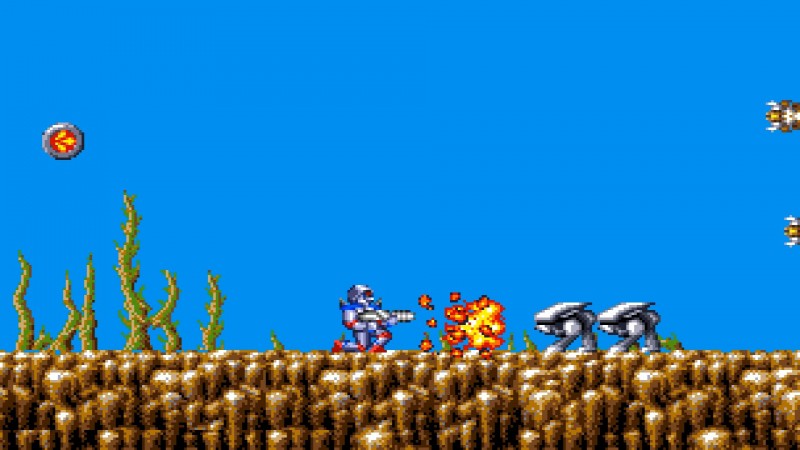 Jeff: If you want to play these games, this is an easy way to do it. It’s a pretty bare-bones presentation; if you’re looking for additional historical context for the series, concept art, or developer insights, you’re better off poking around in Google. You can lean on save states if you find the games to be too tough, and you can also access popup menus with cheats, but that’s pretty much it.

Matt: Yeah, it’s a very matter-of-fact and utilitarian setup. They’ve made it very much about the games and playing the games in the way that you want. But in that regard, I feel like it really excels.

In addition to the save states you mentioned, I adore the rewind mechanic they’ve inserted, which lets you hold down a button and pull the action back as far as you want. That’s a fun feature in any game, but it’s especially useful in one of these old-school action/platformers, where there are a lot of frustrating dead drops and situations where you lose your whole health bar because of a bad leap. Not to mention the times that you fall off a ledge that doesn’t kill you, but demands that you re-platform the last 2-minute section. The rewind gets rid of all that nonsense (if you don’t want it), and let’s you get back to just exploring the levels and progressing. 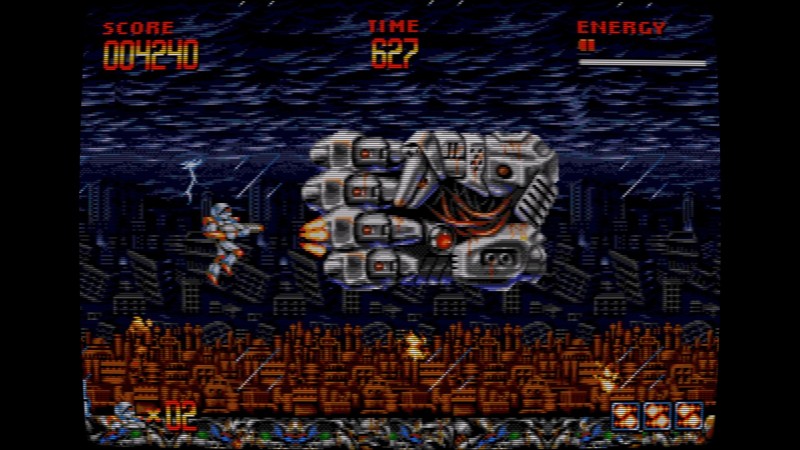 Jeff: You’re right, that’s an extremely helpful feature. Maybe I would have had more positive memories of the series if that feature had been around back in the day.  I don’t want to belabor the point, but it is disappointing that there isn’t much here besides the games. That kind of lackluster presentation isn’t quite as damning when you’re working with a better-known franchise (looking at you, Super Mario 3D All-Stars), but something like Turrican would have benefitted from supplemental materials. On the bright side, the focus on games keeps the file size astonishingly small by today’s standards: I had to double check when it said the download was 48 MBs. Talk about a blast from the past!

Matt: Yeah, in many ways, a release like this should do more to point out why these games should be better remembered than they are. The non-linear designs, the music, the backgrounds and monster designs — many of these things were ahead of their time, even if they weren’t yet perfect by our now-modern standards. I would have loved to see some more of exactly what you’re talking about.

On the other hand, as an ideal way to play four of these games, it hits a lot of good notes.

Turrican Flashback is out now on PS4 and Switch. Check out the trailer below for a look at what you can expect to find in the new collection.