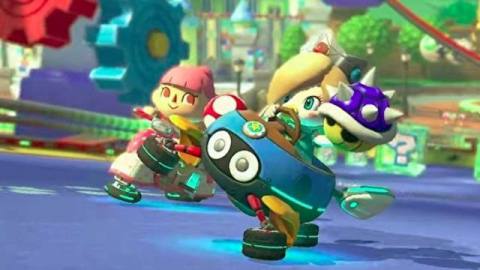 ‘Any last words?’ they demand.

Who said that? Was it Joan of Arc? Mary Antoinette beneath the guillotine? No. It was congresswoman Alexandria Ocasio-Cortez, shortly before she was punted into space during the first round of her Among Us livestream in September. The mainstream press was quick to praise Cortez for her media savvy, but little attention was paid to the game itself (the Guardian called it faddish). This strikes me as a serious oversight. While it looks like something spawned on the pages of Newgrounds circa 2005, Among Us is the perfect game for today – and quite possibly tomorrow, too.

Cast your mind back to March. I know it’s painful, but please, bear with me. Along with sourdough bread and Animal Crossing, there was a period of early quarantine when absolutely everyone was doing Zoom quizzes. It was a nice enough idea. The problem is, quizzes suck. The formula runs dry pretty fast, and there’s no sense of adventure, no drama or visual flair. Quizzes died a gradual death. But the hunger for communal fun remains.

When organizing a digital meetup, we’re stuck with the same question asked by gangs of friends since the dawn of time – where should we go? It’s a delicate balance. At one end of the spectrum you have conference software like Zoom, pure virtual spaces, the equivalent of an unfurnished room in which your friends and colleagues randomly blip in and out of existence. Useful, but not much fun. On the other end are tightly constructed multiplayer experiences: Overwatch, League of Legends, pick your poison. These games are fantastic, but there’s a high barrier for entry, both technical and financial. Somewhere in the centre lies the platonic ideal. The perfect game for just, you know. Hanging out.

I don’t think that game exists yet. But I can take a rough guess at what it will look like – or at least, what it’ll steal from the current leaders. The perfect hangout game will combine three crucial virtues: communication, convenience, and downtime.

Among Us is an obvious example of communication done right, with a paranoia-infused whodunnit formula ripped straight from the decks of classic party games like Mafia and Werewolf. When playing as the imposter, AOC used her natural charisma to deflect attention. ‘Are you really gonna do this to me?’ she asked Rep Ilhan Omar, who agonized, torn between her Democratic loyalties and the overwhelming evidence against Cortez. Every game turns into a little soap opera, with the roles of hero and villain shuffled around at random, weaponizing the player’s personalities to delicious effect. This emotional LARPing might seem a bit goofy from the outside, but it serves a much deeper purpose. Because hangout games don’t exist just to cure boredom – they cure loneliness, too. Engaging players on a personal level is vital.

In terms of convenience, the current frontrunner is probably Fortnite. Epic’s gargantuan cashcow is available on pretty much every platform under the sun, and has surprisingly great accessibility for players with disabilities. It’s also free, brightly coloured, and easy to pick up. Get killed and you’ll drop back in again in under a minute. Don’t fancy fighting? That’s fine, just hijack a truck and hightail it over the nearest cliff. Gameplay is deliberately shallow, so you can dip your toe in and still have a good time. Granted, the motives may be questionable – even the most miserly and strong willed players will find it hard to resist the siren call of the store – but Fortnite’s chatroom/playground blend has set the benchmark for universal appeal.

The last point is the hardest to isolate, but maybe the most crucial: Downtime. Downtime does not mean loading screens, menus, piddling about in the lobby, or any section where a game suddenly decides to get boring. It’s a natural gap, an intake of breath. I had some of the happiest nights of my life playing Mario Kart on the crumb-littered floor of my friend’s student house, but we didn’t sit and play for hours at a time. We’d take it in turns, have snack breaks, run down to Tesco for a pack of outrageously cheap lager. And during those breaks, we’d chat. If casual multiplayer games are to live up to their full potential, they have to integrate some kind of empty space.

No game I’ve played pulls this trick off better than Sea of Thieves. The high seas ArrrrPG is a few leagues south of perfect, even with a slew of new features in the last year. Quests are too open ended, combat can feel fumbling, the mechanics are abstruse. New players will spend a lot of time lost and confused. But it’s in the journey that the game comes to life. Sailing in Sea of Thieves is designed as a slow, careful, collaborative experience. You can’t steer and read the map at the same time. If one person is lowering the anchor, another needs to hoist the sails. Sometimes you’ll run into another ship or a rampaging kraken, but more often than not the trip from one island to another is an interlude of wind and silence, minor adjustments to the rudder, foam-tipped waves glowing in the evening sun. A perfect moment to turn to your crewmates and ask, ‘So how’ve you been? Like, how’ve you really been?’

Pearl-clutching science fiction writers have warned us for years about the dangers of getting absorbed in virtual reality. But life under lockdown has exposed an opposing problem. It’s all too easy to get trapped by the real world, by the grueling repetition of day-to-day work, to drench yourself with bucket after bucket of terrible news. Escaping with your friends for a few hours is nothing less than a matter of survival.

The explosion in popularity of Among Us shows just how hungry people are for new kinds of digital space. Because it’s not enough for a game to just be Mario Kart any more: it needs to be the sofa as well, the beanbags on the floor, the kitchen, the garden, the crazy, jubilant atmosphere of the whole house. That’s what we’re missing right now. Developers haven’t quite figured out how to fill that gap, but I have faith that they will. And when they do, I’ll be there – Carling on my shirt, controller in my hand, grinning from ear to ear.