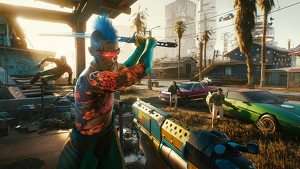 Cyberpunk 2077 is finally here. After an eight-year wait and multiple delays, CD Projekt Red’s massive sci-fi RPG has launched on PS4, Xbox One and PC – with PS5 and Xbox Series X/S upgrades due to arrive next year. Chris has tentatively recommended it in our Cyberpunk 2077 review, so if you’re looking to pick up the game right now, here are the cheapest prices for Cyberpunk 2077.

Remember, if you buy the game on either PS4 or Xbox One you’ll also get a free upgrade to the respective PS5 or Xbox Series X/S version when they are released in 2021. If you own either of the newly-released consoles, you can play these last-gen versions with a few boosts to performance thanks to the backwards compatibility feature.

A quick heads up if you are going to be playing on the base PS4 or Xbox One: the game does not run particularly well on either of those consoles. So far, players are experiencing poor performance, lacklustre visuals and an assortment of bugs. You can expect some improvement if playing on the PS4 Pro or Xbox One X, but it’s clear last-gen hardware is going to struggle with Cyberpunk 2077. Expect an in-depth Digital Foundry analysis soon.