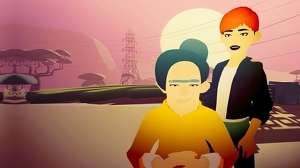 After staying seemingly closed off for many years, 2020 is looking like the year Chinese games break out onto the global market. There’s first-person shooter/slasher Bright Memory, which not only left early access earlier this year but is also being developed into a full-length game, while early footage of next-gen action game Black Myth: Wukong was enough to generate buzz around the world. The biggest success however belongs to Genshin Impact, already the biggest global launch for a Chinese game ever, with over $100 million revenue reported within two weeks of release. If these are signs of a trend, then Chinese developers are in for a bright new dawn of premium-quality games.

But when I think of Chinese games, I’m never just thinking of games made from China. As a Chinese person myself, I’m thinking of all the other cultural traditions and sensibilities that carry across a whole ethnic diaspora. For the longest time, Chinese characters or representations of Chinese culture have come from non-Chinese developers, Street Fighter’s Chun Li or the Three Kingdoms-inspired Dynasty Warriors franchise arguably the longest running examples. That’s not strictly a criticism, but after decades of seeing non-Chinese developers appropriating Chinese culture, I’m interested in seeing how Chinese developers handle their own representation. That is if they do at all.

For instance, China’s biggest mobile game Honor of Kings is a MOBA whose roster comprises a who’s who of Chinese folklore and mythology. Yet when the game received its international release, the majority of its Chinese elements were gutted and replaced with more western archetypes (and DC Comics), ending up with the generic-sounding Arena of Valor that did little to differentiate itself from DOTA or League of Legends.