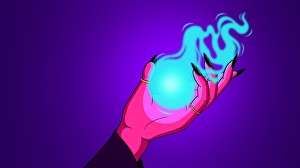 Magic. Have you ever really considered what it means? We’re told what it means a lot, especially in games. We’re told it means fireballs and lightning bolts and turning people into sheep. But is that really magic, or is it simply a term used to describe something we’ve become accustomed to? It’s a thought that’s been nagging at me.

It occurred reading The Tombs of Atuan recently, the second Earthsea book by Ursula K. Le Guin. It’s a book about a wizard but something about the magic feels different. It feels incomprehensible. It’s not defined by dice rolls or numbered values or rules, but worked out somewhere outside of explanation, just past the edge of understanding. A climactic battle happens where you can’t see it: in the wizard’s mind. He holds off a terrible evil but there are no explanations to lay it bare, no parameters by which to understand it. You understand it only as something extraordinary. And it feels like magic.

Or, and you’ll know this one, the moment Gandalf the White rides out from Gondor to repel the Nazgul. I remember reading the book, many years ago, and thinking, ‘Yeah go on Gandalf, mess them up!’ And I expected a fireworks display. But all he did was produce a beam of light. At the time, I was disappointed, but now I’m delighted, because it works. It’s an epic confrontation, you understand that, yet you don’t really know what went on, only that Gandalf won. It’s… incomprehensible.