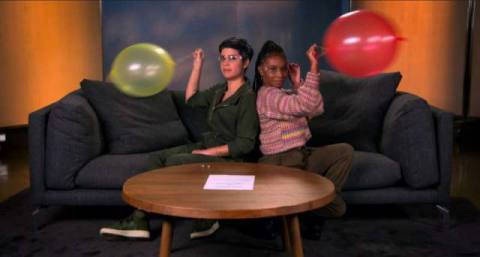 Mythic Quest: Raven’s Banquet is an Apple TV+ comedy that showcases the inner workings of a fictional studio striving to keep its successful MMORPG on top, and it comes from the minds of It’s Always Sunny in Philadelphia’s Rob McElhenney, Charlie Day, and Megan Ganz. The first season was an interesting look at the trials and tribulations of game development, using smart comedy to tackle some of its growing issues. Season two is headed our way on May 7 and focuses on the zany game development team returning to the office after quarantine and trying to launch an expansion for their beloved MMORPG. Ian and Poppy are now both co-creators, but can they really work together, or are they destined to butt heads and drive each other crazy?

In anticipation of the new season, two of its stars decided to have some fun to celebrate. Actresses Ashly Burch (Rachel) and Imani Hakim (Dana) play game testers on the show, but they decided to put down their controllers and test more traditional games like paddle ball and cup stacking. Watch them deliver their verdict on these famous pastimes, rating things like “bounciness” and “fun.” As expected, a lot of laughter ensues as they try out various activities with varying degrees of success. You can watch the silly antics in the video (that we received as an early exclusive) above, which also features some glimpses and hints at the events of season two. We’ll just say, Burch and Hakim have really mastered the art of punching balloons, and it’s no surprise that their great chemistry translates so well to the small screen.

What did you think of Mythic Quest’s first season? And are you looking forward to season two? Let us know in the comments below.

For more on Mythic Quest: Raven’s Banquet, you can read our interview with its creators here.