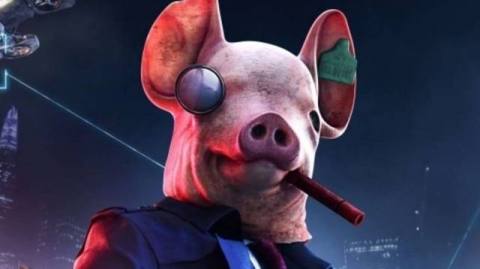 Featuring a beautifully rendered open world recreating one of the world’s most iconic cities, while leaning heavily into hardware accelerated ray tracing, Watch Dogs: Legion is one of the most technically ambitious games for the current cross generation period. The cross-platform comparison between the next generation machines isn’t the most interesting head-to-head we’ve seen so far – PS5 and Xbox Series X are very, very close – but it’s great to see ray traced reflections appear on Xbox Series S. Yes, we’re getting hardware RT on a £250/$250 console.

But to address the most burning question, I can confirm right away that Xbox Series X and PlayStation 5 do indeed run with practically identical visual settings – an almost complete match for the details locked away in the PC version’s configuration files (which don’t just include PC settings, but every single version). This is most readily evident in side-by-side ray tracing comparisons – the RT effect is identical, but crucially, the cut-off for objects not in the reflection is also the same, meaning matched fidelity in the effect itself, but also identical compromises and optimisations.

Series S also has the same settings for its ray traced reflections, but with one crucial difference. The premium consoles target a dynamic 4K rendering resolution for the majority of the presentation, but reflections run at checkerboarded 1080p instead. For Series S with its much lower 1080p target pixel-count, RT reflection resolution drops in step – reflections here are rendered internally at 720p instead, with the same reconstruction technique.

In terms of the rest of the game’s visual make-up, Series X and PlayStation 5 are the same: texture quality is a match, shadow map resolution is the same. A matching geometry LOD set-up is used, meaning that ‘pop-in’ – such as it is – is constant between the two systems. The same can’t be said for Series S, however, with lower resolution shadows, pulled in LOD range and lower quality fallback reflections. In practice, Series S has similar resolution textures, but its lower caching of texture data combines with a generally low level of anisotropic filtering – which hurts texture fidelity when viewed at an oblique angle. Generally, it does not look too great and I am confused as to why anisotropic filtering is reduced at all here.

There seems to be a bug on Xbox Series platforms here as for some reason. Series X delivers a slightly lower level of texture filtering than its PS5 equivalent. Again, checking the ‘reference’ config files stashed within the PC version, Series X and PS5 should be using the same ultra quality setting, while Series S explicitly gets a cut-back rendition of the effect. Beyond that, any differences between the premium consoles are thin on the ground – literally. I noticed that puddles are missing in RT reflections on PS5, but not on Xbox consoles, likely another inconsistency rather than intended behaviour.

Interestingly, dynamic resolution scaling is also a close match between PS5 and Series X, despite a wide gulf in terms of overall compute power and memory bandwidth between the two consoles. Ubisoft has a very fine grain DRS system here, seemingly capable of adjusting resolution on the fly quickly and with tiny adjustment steps. Minimum resolution is close to 1440p (confirmed again by the PC config files) and I noted that general gameplay shifts between 80 to 100 per cent of full 4K, with nigh-on identical shifts in resolution on both consoles in the same situations. It’s only really at night, or in areas heavy in foliage, that the game drops closer to the lower bounds.

Moving over to Series S where its lowest bound resolution should be 900p – I found myself actually surprised how often I was getting straight 1080p counts in areas where I would see resolution dips on Series X and PS5, with the most dips to 900p occurring in those most troublesome night-time or foliage-heavy areas. The level of surprise here is because while full 1080p is often rendered, Series S looks visibly lower to the eye – and I suspect that’s the impact of much lower resolution RT effects.

Performance? That’s simple to tick off. Everything runs at 30fps on all three systems, with none of the varying levels of slowdown found on the last-gen machines – uninteresting for frame-rate graphs but great for the players. I suspect we were limited on both CPU and GPU sides on the last-gen platforms, but the new hardware just powers through, with the DRS system taking care of any potential graphics bottleneck. Given this, I do wonder if an optional performance mode could deliver 60fps gameplay too: according to the config files on PC, there was a 60fps mode in the works for PS5 and Xbox Series X at some point, but that is not the case in the final version of the game. Perhaps that will arrive at a later point.

All three of these new consoles are based on solid-state storage, but we do see some level of differentiation in loading times. To test this, I progressed the game to the same area on all platforms, quit the action and reloaded the save so it loads the same location data. The result? PlayStation 5 gets you back into the game in just over 18 seconds, requiring 26 seconds to do the same job on both of the Xbox Series consoles. It’s a nice little win for the PS5 there, but honestly, it’s still far from the nigh-on instant loading we were expecting from the next generation machines.

All told then, honours are distributed evenly between PlayStation 5 and Xbox Series X – bar one or two minor bugs and inconsistencies. Essentially, they look the same and run identically. If you’re looking to level up the experience, you’ll need to head across to the PC version. Ray traced reflections – even on the lowest ‘medium setting – offer a significant upgrade over consoles, while DLSS is available for PC users to mitigate much of the performance hit. In my tests, Xbox Series X’s output could be matched and even bettered by an RTX 2060 Super, while my optimised settings for the PC version deliver more goodies including higher resolution shadows, a full resolution pass of global illumination and other smaller enhancements. What does it take to run that at DLSS 4K60? An RTX 2080 Ti or RTX 3070 should do the trick – but let’s just say that once you get close to 60fps, the CPU becomes far more of a limiting factor in this demanding game…