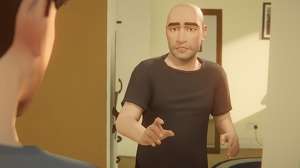 Last Stop, which was unveiled back in 2019, is described as a game about “secret lives, the ties that bind, and how magic can be found in the mundane”. It tells three occasionally interweaving stories set in modern day London, each focussing on a different cast of characters.

Variable State’s latest look at Last Stop hones in one of those characters, John – an “overworked middle-aged single dad” who, thanks to the aforementioned supernatural malarky, has accidentally swapped bodies with his next door neighbour Jack. The pair must work together to return to their original bodies and lives.