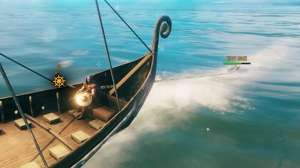 We’ve already seen some pretty funky physics from Valheim’s abyssal harpoon, but beyond NASA space programs Valheim players have now found a more practical use for the weapon: as a way of transporting heavy goods by waterski. Or maybe it’s more like those inflatable tubes you can tow behind boats – but close enough.

Over on reddit, user LostYugen yesterday posted a video showing that a player can be harpooned while holding a cart, then towed by boat, allowing for the transportation of a huge number of items. The maximum number of slots in a Valheim longboat is 18, and by towing a cart you can double this amount to 36. Previously, some players had attempted to balance upturned carts on their boats to haul massive amounts of ore, but this technique can easily be scuppered by a storm – or simply some bad sailing. In fact, LostYugen explained they discovered the waterskiing method after one of their carts was knocked out of their longboat by a wave. Others have noted that placing a heavy cart on a boat can also make it much harder to steer. Could the cart-towing method actually be more reliable?

To test this out, I enlisted the help of Eurogamer video producer Ian “Tippy Mcgee” Higton and hopped on a longboat to use him as serpent bait try some Viking waterskiing. To our surprise, the method worked, and Ian was dragged along with a cart full of stone. Ian said he didn’t lose any stamina as he wasn’t actively swimming, and therefore didn’t take drowning damage while being dragged behind the ship.