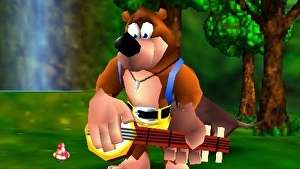 Nintendo fans of a certain age might recall the excitement surrounding an innovative feature planned for Banjo-Kazooie on N64 which would enable it to interact with its sequel, Banjo-Tooie, opening up previously inaccessible areas and items. Regrettably, the feature was quietly scrapped, but newly unearthed correspondence from Nintendo has finally revealed why.

But first a bit of background; when Banjo-Kazooie released in 1998, players that managed to 100% the game were treated to a special secret ending showing Banjo accessing three previously sealed-off areas – a mysterious risen island in Treasure Trove Cove, a frozen ice cave in Freezeezy Peak, and a sealed cliffside doorway in Gobi’s Valley. However, despite these tantalising teases, all three areas remained stubbornly inaccessible and it wasn’t until a few months after launch that developer Rare offered an explanation.

“All the secret stuff can only be reached when playing Banjo-Tooie, the planned (and naturally better) sequel to Banjo-Kazooie,” it wrote on its website, as documented by RareGamer. “Whilst playing ‘Tooie, you’ll be able to come back to ‘Kazooie and grab the hidden goodies, before spiriting them away into the sequel where they will be put to good use.”