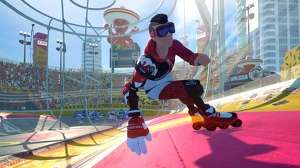 Ubisoft is throwing open the doors to Roller Champions – its free-to-play team-based skater – next month, with a European-exclusive closed beta for players on Xbox One, PS4, and PC.

Roller Champions, if you’re unfamiliar, is Ubisoft’s stab at creating the kind of raucous, knockabout sports mash-up that’s made Rocket League such a perennial favourite, and it plays something like a fast-paced hybrid of competitive roller-skating, hockey, and football.

Each game see two teams of three players hurtle around a track attempting to wrestle the ball from one another. Then, once the ball is in a team’s possession, they need to complete at least one lap before pelted it into the goal. It is, however, possible to rack up additional points by holding onto the ball for multiple laps before taking a successful shot.