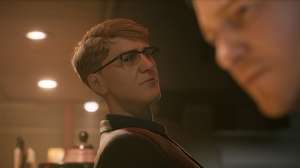 A car drives down a quiet road, past rows of trees, until you eventually glimpse a town, its long-abandoned factories stretching into the skyline. The images are accompanied by a sombre song by folk artist Sean Rowe. Welcome to Basswood, West Virginia.

It’s an impressive way to start, not least because of how good Twin Mirror looks, and Dontnod knows it – just a few minutes before reaching his destination, protagonist Sam Higgs gets out of his car and glances down at Basswood from a viewpoint awash in the rays of the setting sun. But then Sam opens his mouth – and things inevitably go downhill from there. Sam has returned to his hometown to attend his best friend Nick’s funeral. Trouble is, as Sam puts it, he’s ghosted Nick for two years after leaving Basswood in a hurry, and now Nick’s ghosting him by being dead. This, maybe five minutes into the game, is the first moment I put the controller down and looked into an imaginary camera like I’m on The Office, because this is the type of writing you are in for.

Sam used to be an investigative reporter at the Basswood Jungle, where he uncovered the local mine’s violation of safety protocols. His reporting led to the closure of said mine, and to a lot of angry miners, who greet Sam with the mating call of every fictional bully to his victim of choice: “Well, well, well, look who we have here!” It emerges rather quickly that no one in Basswood is strictly speaking a nice person, not to each other and certainly not to Sam, who most residents have decided was single-handedly responsible for the demise of the town.