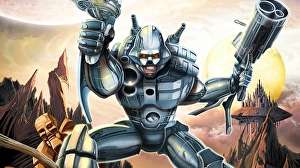 Last year brought welcome news of a comeback of a beloved name in gaming, and in tandem with that news the revelation, to me at least, that another famous name in video games wasn’t perhaps as dormant as I’d thought. With the release of Turrican Flashback later this month – a collection of the much-loved run-and-gunner series’ highlights – we’re not only seeing the return of the Turrican name, but also of developer Factor 5, the famed outfit behind the Rogue Squadron games and countless other fascinating projects that sadly shut down in the tumultuous wake of Lair’s release.

“We never split just because the studio shut down here in the US,” studio founder Julian Eggebrecht tells me from his Marin County base. “[The studio in Cologne] stayed open in many ways, and we just pivoted from game making to video-on-demand services. While the company was going through the bankruptcy, I got in contact with Netflix, and we got a lot of the early clients for all of the streaming tech back in 2009 – and then pretty much all of those streaming apps that you’ve been using on consoles and lots of other platforms as well.”

It’s heartening to know that, without even knowing it, there’s been a little piece of what was once Factor 5 on the various consoles I’ve owned over the years – and I’m sure it was a lucrative turn for Eggebrecht and co. too. “We did that for a decade,” he says, “and it wasn’t the worst bet!”