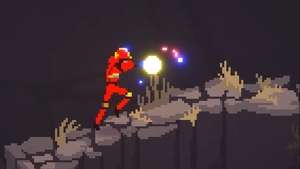 There’s a Turbo Kid video game in the works.

Turbo Kid is the superb, super violent B-movie superhero cult hit comedy film set in an alternate 1997 post-apocalyptic earth. It stars The Kid, who teams up with a mysterious girl called Apple to defeat a warlord played wonderfully by Michael Ironside. The music is great. The film is great. You should watch it!

Now, there’s a Turbo Kid video game. It’s a Metroidvania in which you play as The Kid, fighting across the wasteland. It’s developed by Outerminds (best known for making YouTuber PewDiePie’s games). Based on the trailer, below, it’s got loads of pixel art gore – as it should.