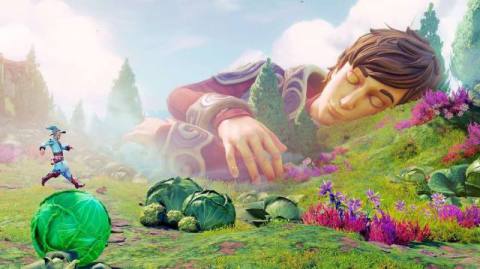 Out on PC this month, consoles next year.

Developer Frozenbyte is returning to last year’s well-received Trine 4: The Nightmare Prince for six new stages of side-scrolling platform action, as part of its new Melody of Mystery story DLC, due on PC later this month, and consoles next spring.

Trine 4’s three-strong band of heroes – Amadeus, Pontius, and Zoya – returns for Melody of Mystery, this time embarking on an adventure that sees the trio attempting to free the students of the Astral Academy, who’ve been ensnared in an enchanted slumber.

There’s a “suspicious and mistakenly freed spirit” on the loose, according to Frozenbyte, and the ensuing adventure – which, as per the base game, can be played co-operatively or otherwise – will include new music and voice acting, upgraded abilities, and “fresh puzzles incorporating new elements like sheets of ice, torches, magnets, and crystals”. Some of that gets and airing in the typically gorgeous teaser trailer below.

Eurogamer was quite taken with Trine 4 – which wisely ditched the third game’s divisive foray into full 3D, returning to the series’ side-scrolling roots – when it released last year, calling it “outrageously pretty and newly refined”, before slapping it with a Recommended badge.

And if it’s more of that sort of thing you’re after, Trine 4’s Melody of Mystery DLC comes to PC via Steam, GOG, Origin, and the Humble Store at some currently unspecified point this month, and is due on Switch, Xbox One, and PlayStation 4 in spring next year.