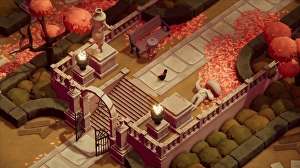 In amongst today’s ID@Xbox fiesta you’ll have likely clocked Death’s Door, a game where a small, sword-wielding crow has it out with a rocket-fuelled cathedral, amongst other things. This is the new game from Acid Nerve, the two-man studio behind the tense, one-hit boss-hunter Titan Souls. It’s coming to Xbox and PC soon-ish – “We’re getting to the last stages now, just polishing and bug fixing, so we’re expecting it to be out this summer,” designer David Fenn tells me – and it looks extremely good.

The premise – not that this kind of spicy crow-on-chateau action needs much embellishment – is that the little bird is a reaper, who has to go about collecting souls from people in a world where people and things no longer naturally die. You report to some weary bureaucrats, also crows, who need to keep doing this soul-harvesting job to survive themselves, but then one day one of your big souls gets stolen, which is not good, and off you go: laser cathedral. Boss frog. Waves of gelatinous blobs and bubbling hazards in a weirdly touchable, gothic plasticine world.

Its Titan Souls lineage seems clear, obviously in those structured, big-on-small boss fights, but also in the slightly mournful tone between the action (I saw a slightly different bit of footage to that one above, with a bit more of the combat – it looks very, very good). And yet Death’s Door is actually pretty different. “Kind of the opposite,” in fact, as fellow designer Mark Foster puts it. Titan Souls was built on a single, very specific idea: a game jam prompt of “you only get one” that gave what Fenn called a kind of “textbook indie elegance – where there’s really no words, there’s no UI, everything is like as efficient as minimal as possible.”