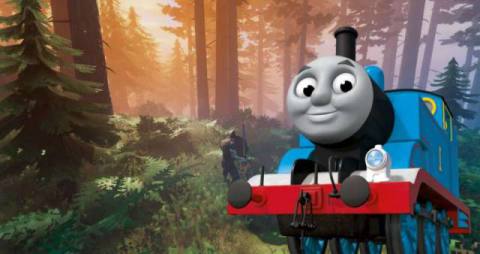 When a game can be modded, it will be modded, usually with Thomas the Tank Engine. That being said, one Valheim player decided to bring the iconic ‘choo choo that could’ into the Viking game and said, “Mods? Don’t know her.”

Usually, when ‘ol Tommy boy joins the mix, it’s because of the ongoing Tank Engine joke in the modding community. But Valheim is a creative experience all on its own, which means one player decided to take it upon themselves to continue on this tried-and-true modding tradition. Just without the actual mods.

Not so scary now, are you, big guy? from r/valheim

We’ve been sharing many creative endeavors in the world of Valheim lately, including this ongoing (and impressive) 1:1 scale replica of Skyrim’s Whiterun, spoof “feel good” videos about Greylings, and more. It’s easy to share player creations because the community for Valheim is huge.

Ever since this Early Access title launched on Steam, it has dominated the charts time and time again. It’s a survival game for those that don’t like survival games because the survival mechanics are done in a way that feels like a chore. Instead, the calming soundtrack and soothing art style make it easy to want to explore this beautiful world. The crafting and creation side of Valheim also is nothing to scoff at, with even more options to expand coming in future updates.

Valheim is a game we can’t recommend enough. We’ve been playing it a lot ourselves here at Game Informer, and our own Dan Tack has written several helpful guides to help players get started. To learn more about this PC adventure, you can check out our game hub here to find out what sort of magic this tale has to tell.

Thoughts on Valheim, the tradition of Thomas the Tank Engine, or the Early Access world in general? Sound off with your hottest of hot takes in the comment section below!