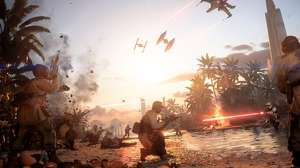 Star Wars Battlefront 2, it turns out, is really quite good. I’ve been playing – the new one, this is – a little obsessively over the last week, an obsession launched about three-and-a-bit years too late as far as poor DICE is probably concerned, and one which I feel a little guilty about, not least because I got it for free.

Battlefront 2 was handed out for free for about a week on the Epic Games store in January, you see, and it’s also bundled in with a Game Pass Ultimate subscription, thanks to the recent inclusion of EA Play with that, too. The result has been a late, but seemingly quite sustained second wind. Servers are full, and quite nicely balanced, with the end-of-round scoresheets showing everything from max-level players with 60-plus kills to low-level newbies holding their own. On PC at least, people are quite chatty, via the in-game feed, in that very Battlefield kind of way, and unlike Battlefield it’s quite chill, as far as multiplayer shooters go – because Battlefront 2 is quite a chilled game.

“Quite good” and “quite chilled” – I feel like I’m underselling it. Battlefront 2 is ace. It’s a proper just-how-I-remembered-it job, building the big, headliner multiplayer matches around the beats of silliness and exaggeration: choke points, rockets, obscene amounts of lasers. Total, joyous, balanced carnage. There’s a trick borrowed from an unexpected source here, in the way Battlefront 2 is set up to win you over not with nostalgia, which can be cheap, but by evoking actual, specific memories or specific emotions you last had in childhood. It’s all about recreating the schoolyard role-playing games you might have played, the silly felt-tip drawings of massive, droid-army battles, the fantasies of heroism, inspired most vividly by the prequels, purposefully childish themselves. This is Hitchcock. For him it was using tricks of light and shadow to make some fear come to life, like the innocuous toy on the bedroom dresser that seemed so spooky in the night. Or it was using the conceits of plot to mimic the thrills of hide and seek. Using the grand, imaginative fear of the unknown. It’s not the same, obviously – but also it kind of is. It’s the same trick, used another way, and it works. Hitchcock! In Star Wars Battlefront 2!