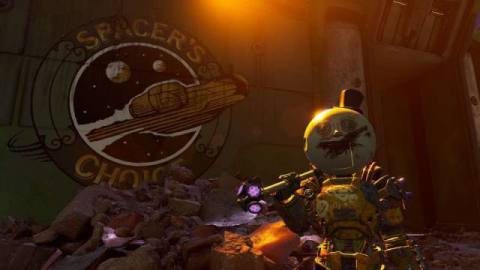 Obsidian Entertainment announced that The Outer Worlds’ first expansion, Peril on Gorgon, is heading to the Switch version of the game on February 10 – that’s a week from today! The DLC was released last September for PS4, Xbox One, and PC and takes players to the lawless asteroid Gorgon to solve a mystery surrounding a doomed Halcyon science experiment.

Gorgon was once the site of a Halcyon science outpost but things went sideways after a major experiment went horribly awry. The floating rock has since become a den of galactic debauchery. The crew of the Unreliable find their way to Gorgon after receiving a mysterious message packaged with a severed arm and meet Minnie Ambrose, a wealthy recluse, who tasks them with finding her mother and the director of Halcyon’s failed project, Dr. Olivia Ambrose. Naturally, things only spiral outwards from there as the crew gets wrapped up in a grander mystery. On top of offering a new narrative adventure, Peril of Gorgon bumps the level cap up to 33 and introduces new perks, flaws, wacky new weapons, and armor sets.

Now that Peril of Gorgon will soon be available on all platforms, that hopefully signals an incoming release date for The Outer Worlds’ second announced expansion, Murder of Eridanos, which we still know little about. While we can’t wait to see what the next expansion entails, many fans are probably hoping for any kind of confirmation on a full-on sequel, but that likely isn’t happening for some time given Obsidian is tied up with finishing Grounded as well as working on their next RPG, Avowed.

For a more visual idea of what dangers await in Peril on Gorgon, you can check out the DLC’s original launch trailer or watch us go hands-on with it in this episode of New Gameplay Today. You can read our review of The Outer Worlds’ base game here.