It’s hard to think of a better setting for space-age sleuthing than The Outer Worlds.

And in this second and final story DLC, Murder on Eridanos, the crew of the Unreliable is once again called upon to accidentally fill the boots of the renowned captain, Alex Hawthorne.

Drafted in by the Rizzo’s corporation to investigate the untimely demise of aetherwave star and brand ambassador, Halcyon Helen, the team travels to a far-flung resort world that plays home to the galaxy’s swankiest hotel: The Grand Colonial.

“The mystery is the hook that pulls you into this little, self-contained, corner of Halcyon,” Nitai Poddar, narrative designer at Obsidian Entertainment, developer of The Outer Worlds, says.

“It’s always difficult to do a murder mystery in an RPG. Especially if one of the pillars – as in The Outer Worlds – is a lot of choice in how you want to play. That may include a character that’s not suited to being an inspector at all!

“So in order to account for this option of role play, we try to make the murder mystery itself the basic premise of the critical path, but really, as you go through Eridanos, there are a lot of things happening.

“There’s the corporate absurdity, lots and lots of memorable characters – more than any other piece of content in our base game – Murder on Eridanos is very character-centric.”

Obsidian has long been established as one of the best role-playing studios around. As the memories of technical hiccups fade further into the distance, its work on Fallout: New Vegas just seems to be more and more fondly remembered. 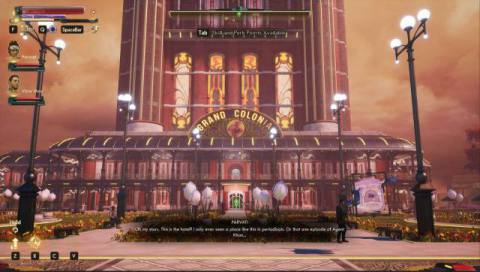 While its approach to layered storytelling and diverging paths on the way towards multiple endings was only refined over games like Tyranny, Pillars of Eternity, and eventually The Outer Worlds.

But where the previous story DLC, Peril on Gorgon, ran through chunky sections of combat almost as soon as you’d touched down on the new planet, the opening of Murder on Eridanos goes to greater lengths to establish its place in the universe.

Casting you as an inspector whether you like it or not to begin with, Murder of Eridanos begins by fusing elements of classic Agatha Christie-style murder mysteries with its signature retro sci-fi aesthetic and sense of humour, before letting you run off with the story down any of the many paths laid out for you.

“We knew it was going to be a murder mystery, but we were asking ourselves as a team the same questions you’re asking now. How do we do a murder mystery in Halcyon? A setting that is very much about corporate authority, factory workers and that sort of thing,” Poddar explains.

“You need a setting that evokes the same tradition of trashy 1920s newsprint dime novels, which would always have some sort of grand, ostentatious, or exotic location.

“The high-end hotel where a celebrity is murdered is a classic trope of the old-school murder mystery, so we did reach for the grab bag and shove them together in one area.

“One of the benefits of that is it lets players enter the unfamiliar territory of the new DLC but feel like they’re on familiar ground.

“When we have that solid footing of recognisable imagery and familiar tropes, then we can throw the unfamiliar at you. We can undermine your expectations by setting up those expectations to begin with.”

A big part of establishing that ambiance is the setting. The Grand Colonial hotel is one of the stronger environments throughout the entire game, and has a much different vibe to the dilapidating Monarch or bourgeois-with-an-authoritarian-edge city of Byzantium. 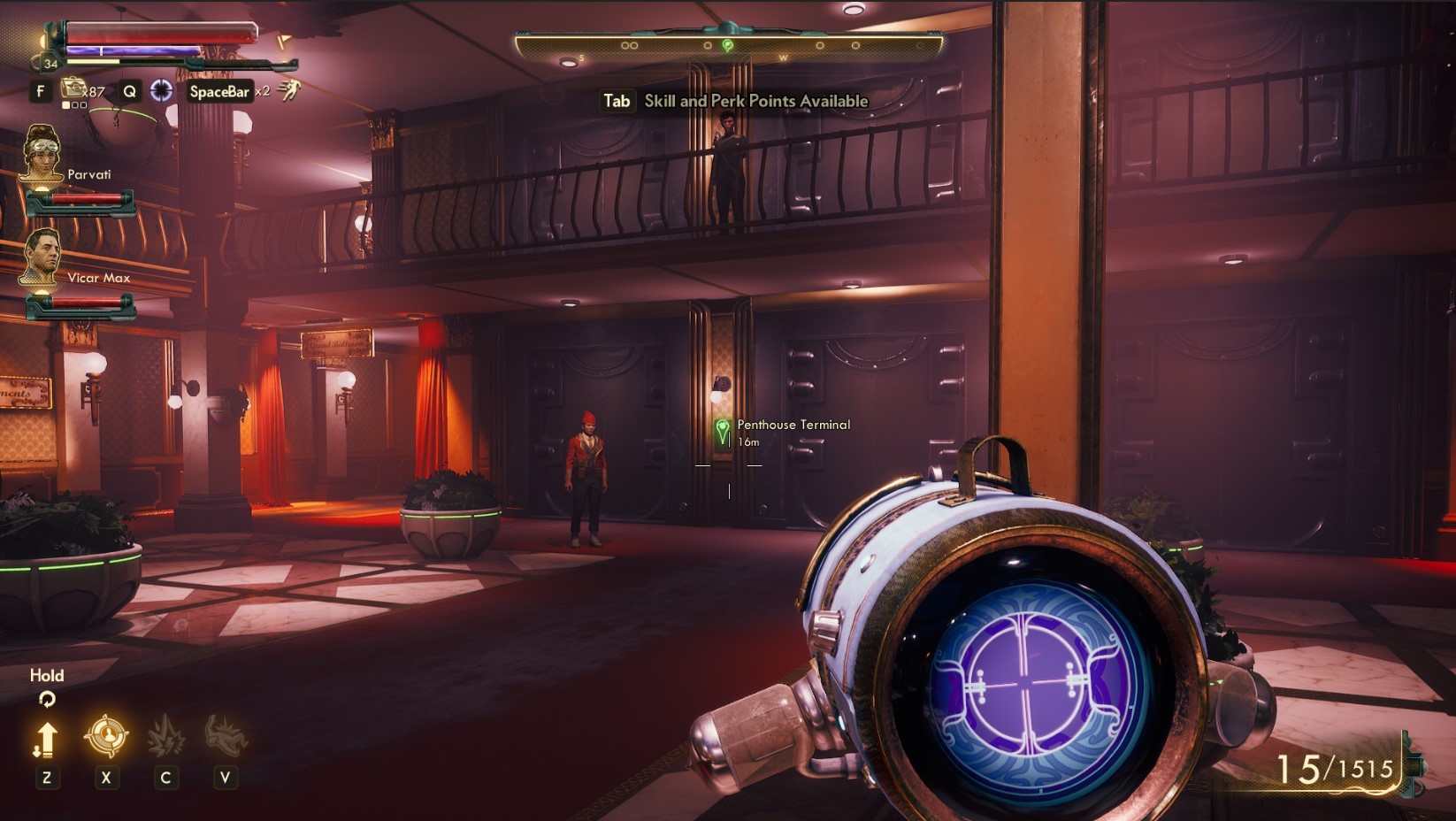 It’s designed like a wheel, with the main building at the centre and different amenities at the spokes. This not only let Obsidian lean into the funnier and more referential side of The Outer Worlds by lining up lots of different locations for wacky situations, but let them build on lore that there wasn’t space for in the main game.

“There are so many things in the base game that you only get pieces of, and this DLC does a really good job of bringing it all together,” Tim Cain, co-founder of Obsidian Entertainment, says.

“For instance, the planet of Eridanos already exists in your system map, you just couldn’t go there. And you might have visited Odeon Pictures in Byzantium – well now’s your chance to meet some of those movie stars, like Spencer Woolrich himself.

“That’s another thing that we always had in the game, along with the acting robot Burbage 3000. These are things that if you watched all the loading screens and played all the side content you’re already familiar with, but you’ve never actually met them.

“You hear a lot about tossball, but now you’re actually meeting one of the top tossball players. And they have a reason to be there; these people have information or are suspects.

“I felt if you’re someone who played all the side quests, Eridanos provides a lot more of that kind of content. As you explore and start to uncover things, you go: ‘yeah, this is The Outer Worlds’.”

“That’s the reaction we want players to have: ‘why would they do this? Oh, it’s The Outer Worlds’,” Poddar adds.

“There were moments when the writers came in and said: ‘Can I do this, can I do that? What if we do this with this character?’

“Our director Megan [Starks] would take a look at them and say: ‘go for it, sounds like a good time’, so there’s a lot of weirdness in this expansion, which is a direct result of writers – possibly in some kind of quarantine-related haze – doing nonsensical things for the fun of it.” 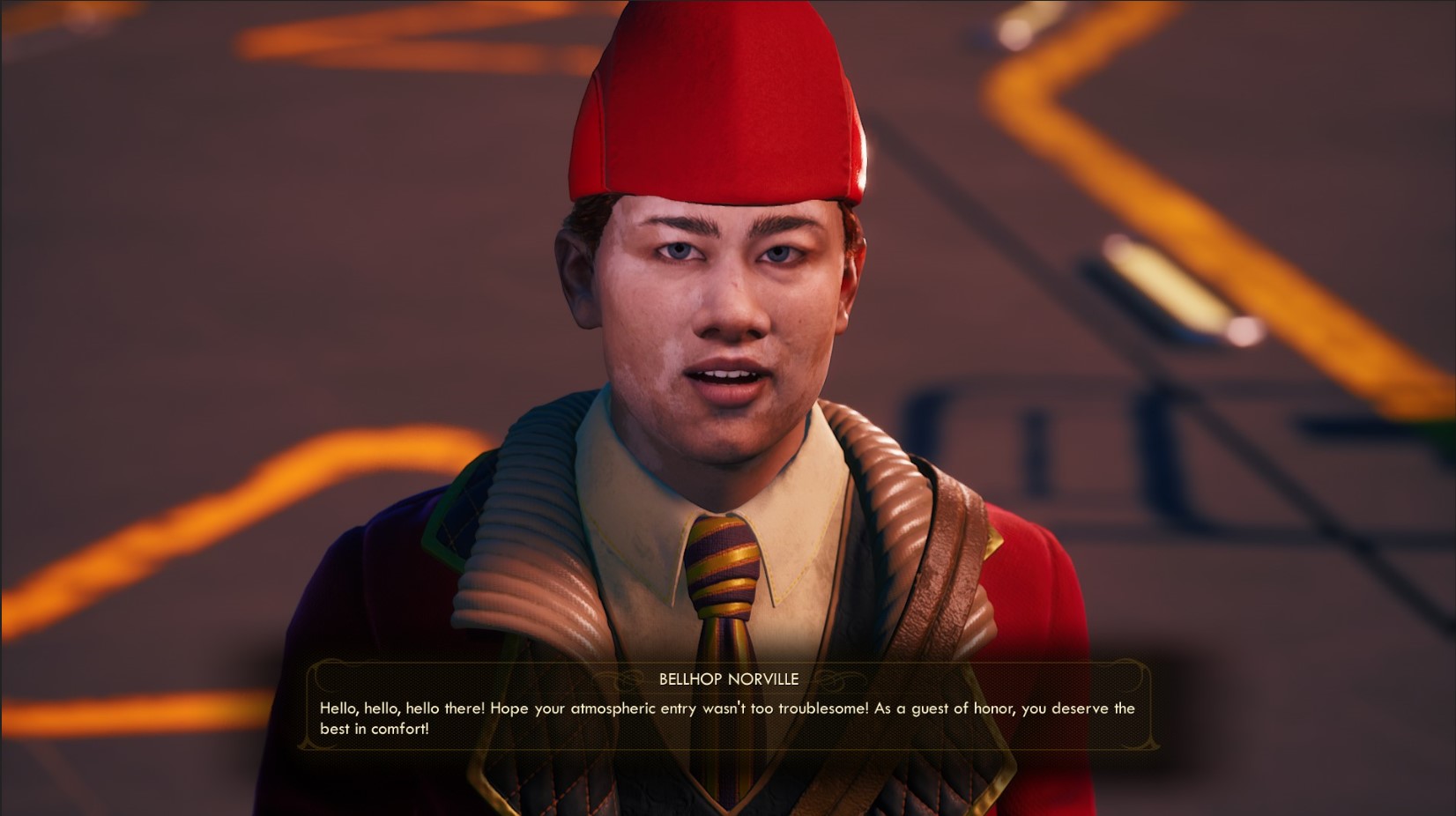 But while this is the final story DLC for The Outer Worlds, it’s not intended as some sort of teary goodbye to the friends you made along the way – especially as it happens before the canon end of the game in the timeline.

Instead, Murder on Eridanos is hefty chunk of what The Outer Worlds does best. Served with an interesting new clue-sniffing mechanic in the form of the Discrepancy Amplifier – a weapon which lets you hunt down glowing pieces of the puzzle around the hotel grounds – and a lot of laughs and goofy situations to explore with your favourite companions.

“I’d say Eridanos and the second DLC was never designed to put a bow on the main story, or to tie up loose ends, or finish the story of The Outer Worlds,” Poddar says.

“But knowing that it’s the final DLC is a love letter to the fans. If we’re going to go out with one DLC, let’s make it something fun, something full of the moments that fans love in this game, and put a lot of effort into upping the production value and making it really impressive.

“One of our writers, Kelsey [Beachum], came up with a wonderful idea for a marquee moment with our companions. I won’t spoil it, but if you get a chance to talk with a certain tossball player who happens to be in the area – please bring a companion and have them help you out.

“That moment was so much fun to write, and every companion has a different moment in the spotlight in that particular interaction.”

The Outer Worlds: Murder on Eridanos is out on PC, PlayStation and Xbox on March 17, and the recommended player level is 30.

The post The Outer Worlds: Murder on Eridanos DLC interview | “There’s a lot of weirdness in this expansion” appeared first on VG247.