Microsoft’s entry into the gaming headset market isn’t perfect, but it’s a very strong offering for the price.

The design team behind the new Official Xbox Wireless Headset plainly had two missions: first, to create a best-in-class Xbox headset at a sub-$100 price. But second, and equally important, it also had to be a solid, high-quality multi-purpose headset in general, comfortable to be used with your PC, phone, or whatever other audio tech you might use. It’s not a complete home run, but it’s definitely a very good attempt, and a real contender for one of the best headsets on the market for its price bracket.

So, here it is: the first full-on official Xbox premium wireless headset offering, coming in a relatively unremarkable but good-looking headset design. It’s slim, and in a sleek black with only the slightest hint of green Xbox brand highlights. Like Xbox controllers, the box opens up on a hinge in a nice bit of presentational theatre – but you’ll also find that box surprisingly empty, with just the headset, a short USB-C charging cable, and wafer-thin instructions. Being an official headset, there’s no need for dongles or pass-over cables, or any of that other rubbish – it’s an all-in-one experience.

Before we get into how it performs, a few quick notes on design: it’s good. The Microsoft technology design teams seem to have been on a bit of a roll recently – I think the Series X and S follow on nicely from stuff like the Xbox One X and Surface laptops as lovely pieces of tech that strive for that premium feel that Apple did so well with, and this headset feels in that vein. At just over 300g, it’s light enough to be worn for a decent amount of time, but also sturdy enough that you can see it surviving a Fortnite-obsessed teen using and abusing it, tossing it across their bedroom and knocking it onto the floor thoughtlessly. It’s sturdy but obviously not invincible, however, and the rage-inclined might want to refrain from chucking it against the wall with considerable force, no matter how badly you get beaten.

The most important bit of any headphones, for my money, are the soft bits – the parts that come in contact with your body. The ear cups and inner headband are made of a soft foam with an artificial leather covering – pretty much par for the course with headphones in this class. It’s very comfortable, and dodges being too sweaty in warmer conditions – though as ever, I worry about how well the faux leather will hold up after many hours of use; on some other brand headsets with similar setups, I’ve seen the leather practically disintegrate after intense use.

I’m generally impressed with the headset’s design, though. To be frank, I’ve got a pretty fat head to begin with, but right now I also have lockdown hair – which for me is an afro, so rather than just hanging, it just goes up and out in all directions. Anyway, my point is – tighter, less flexible headsets are a tough ask for me right now. Indeed, the PS5 Pulse Headset isn’t great for me currently. But this headset? It’s alright! It’s comfortable, even with my current hair situation. Microsoft’s design team has done good.

The other key part of a headset design beyond comfort is how intuitive it is to use. I’m pleased, again, to report that the solution on offer here is elegant. Each ear cup of the headset has a circular cover that can be rotated; the left one allows you to balance game and chat audio, while the right is a simple volume dial. The volume dial has a lovely, affirming ‘notch’ at the end to tell you that you’re at maximum volume or muted, while the balance dial places that notch instead in the middle, so you can easily find the mark where it’s 50/50 between game and chat audio. This has been borrowed from Microsoft’s premium Surface-brand headphones, and the quality is as good here as there.

The mic is permanently attached to the headset, which is a bit of a shame if you wanted to use these out and about for non-gaming purposes. While this stubby little mic is relatively discrete compared to some options, there will still always be a mic jutting out from the left side. Out of sight but easy to reach is a mute button – if you grab hold of the headset while it’s on your head with your left hand, your thumb will naturally hover over the mute. A light is hidden in the tip of the mic, and that illuminates just enough to alert you in your peripheral vision as to if you’re live or muted.

On the very back of the headset is a little green sync button – this can turn the headset on or off with a hold, and is also used to sync to an Xbox using exactly the same method as a normal controller. It’s all very easy to use; comfort comes first, which is great for long gaming sessions but also for mixed media use away from an Xbox or PC.

On the technical side, the headset supports the current Xbox ecosystem including the One console and the new Series X and S, but also simultaneous bluetooth with phones and PCs. Connecting it directly to a PC via USB-C also makes it into a nifty wired headset. If you want wireless PC action, it can connect to a PC wirelessly either via Bluetooth (version 4.2) or with the same dongle that Xbox controllers use. The dual connectivity is the coolest technical trick this device plays – with it, you can answer a phone call in the headset while playing a game, while still able to hear the game audio.

This is achieved through the fact that there’s two wireless protocols at play; the Xbox wireless, which is used to connect to a console or PC just like a controller, and a standard bluetooth protocol. That means you can mix it up; you could connect this to your Xbox for game audio, and then bluetooth to your PC to hang out in Discord while you play. The more obvious case use, of course, is to bluetooth sync this to your phone, which will then ring and can be answered in-headset while you play. The volume control on the headset will only impact the Xbox audio in this instance – you’ll have to adjust volume otherwise on the connected phone or other device itself. That’s slightly inelegant, but it’s also a decent trade-off for the very useful two-device feature.

Battery life seems decent, though I’m in the early days of giving this accessory a proper, in-depth run-out. Microsoft says the headset will run for fifteen hours, and has fast charging where plugging it in for just 30 minutes will give you 4 hours of battery life, with a 3-hour charge to fully top it up. With a sufficiently long cable you can also use and charge the headset at the same time in exchange for charging speed – a welcome, necessary quality-of-life feature. So far so good, right? So the big remaining question is the sound itself. That crucial aspect is… just fine, though it’s buoyed by the clever software that Microsoft employs, too. The headset’s audio performance is actually a little better than I expected given the price bracket, and I’d say it’s more than a worthy equal to its official PS5 rival, Sony’s Pulse 3D headset. As a raw bluetooth headset, it’ll be fine for casual listeners but perhaps a little lacking for the more discerning audiophile for music and the like – but those people arguably won’t be listening to anything through a set of $99 headphones, so that’s less of a concern. They’re decent enough music cans, however, with a full, thick bass by default that feels more at home with more electronic music than, say, the punk I initially tried blasting through it.

On Xbox, and in game, the results are better. Support for Dolby Atmos, DTS Headone:X, and Windows Sonic can all offer depth and virtual surround within various Xbox games. But the base thing you’ll be more inclined to fiddle with are the main headset options, which are folded into the standard-issue Xbox Accessories app where you can also do things like tweak your controller. Within this app you can access an actually pretty mind-boggling amount of customization that’s usually reserved for higher-end, more expensive headphones – and this in turn lets you customize the game sound to your liking. 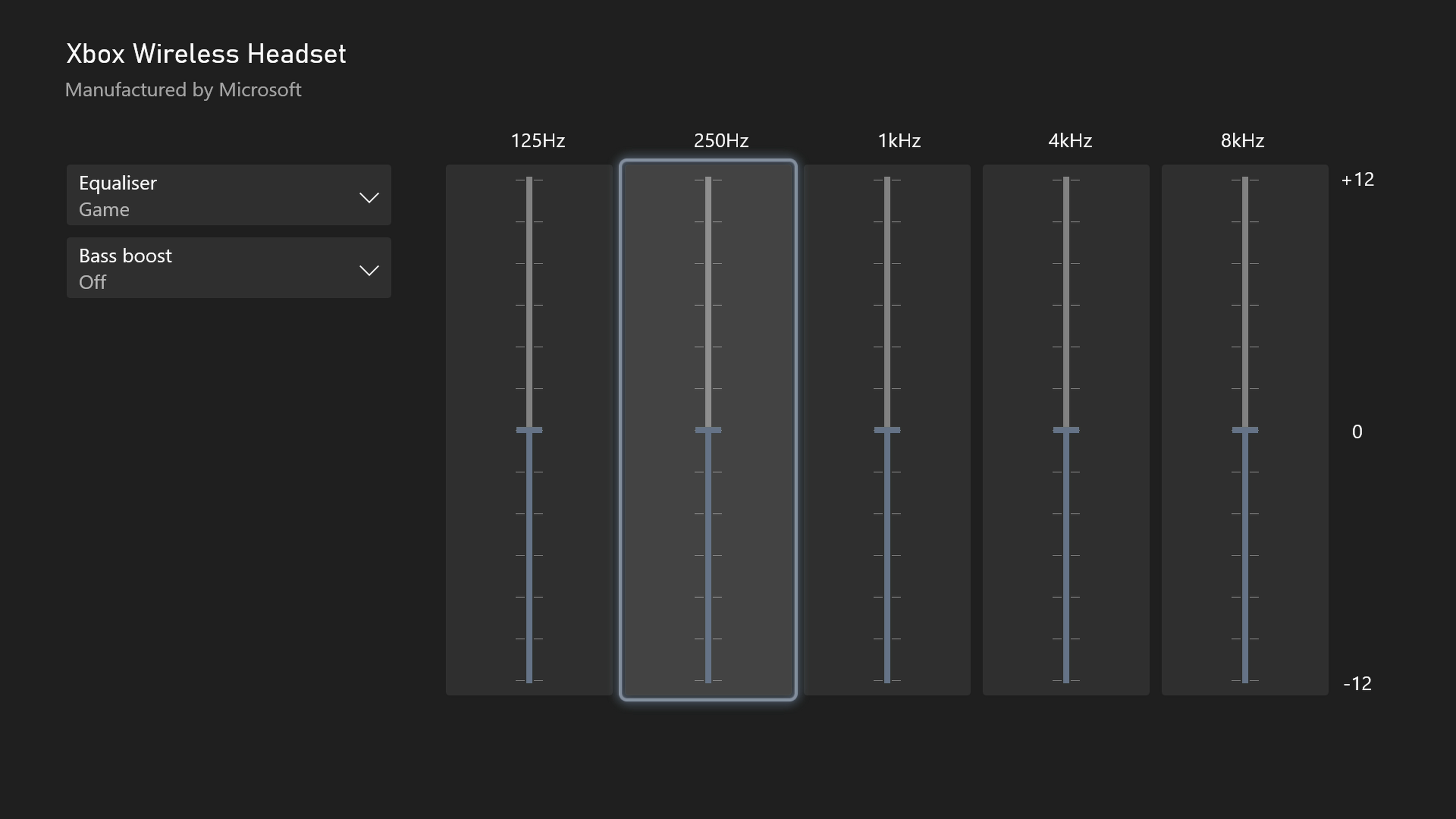 Once you’re synced up, the Xbox Accessories app has a wealth of options ranging from the small-but-useful like controlling the brightness of the mute light and a tweak for an auto-mute mode that kills the mic except for when the headset specifically thinks you want to broadcast to the world. The main reason you’ll hop over to this app, however, is to adjust EQ settings to tailor the song. There’s a series of basic presets, a bass boost, and the ability to create your own new presets. Don’t expect a revelatory difference through this, but the results are surprisingly clear for a headset at this price point.

That’s probably the headline here, in fact: this isn’t a revolutionary, top-of-the-range headset – but that also wasn’t Microsoft’s intent. This is an everyman headset designed for anyone who wants something that’s going to enhance their gaming experience a little over TV speakers and allow them to crank the volume late at night – but without breaking the bank. It’s not for audiophiles, but as the official, branded entry-level Xbox headset, it’s right on the money – and it’ll serve you well outside of gaming as well.

Stock is limited right now, but the Xbox Wireless headset is available to buy directly from the Microsoft Store. You can also find it at Best Buy and Walmart in the US. In the UK, retailers such as Amazon, Very and Currys PC World have it for sale.

The Xbox Wireless Headset is out now, and costs $99.99 / £89.99. A sample unit of the headset was provided by Microsoft for review purposes.

The post The new official Xbox Wireless Headset is a best-in-class offering for the price appeared first on VG247.