With Xbox Series X|S about to get its first proper console exclusive, The Medium dev Bloober Team talks about how the studio has accomplished this achievement.

The Medium is Bloober Team’s most ambitious game to date. Not only is it the biggest production the developer has taken on, but it’s also a next-gen Xbox console exclusive arriving at a time when those are practically non-existent. I spoke to The Medium Lead Designer Wojciech Piejko and Producer Jacek Zięba to find out what pressures this has put on the firm, their thoughts on Game Pass, and just what they think about Microsoft’s budget next-gen console, the Xbox Series S.

“I think it definitely is the most ambitious, because you know this dual screen and all those mechanics, but also it’s like our biggest game in terms of everything,” says Piejko. “Here we switch from the first-person to a third-person perspective which of course requires, you know, more animations and more, you know, mechanics and stuff that we know we weren’t so powerful with as a studio, so yeah, we are, you know, always trying to push ourselves further.”

Layers of Fear, the first-person horror game from 2016 demonstrated the potential inside the studio, and the games have come thick and fast since. “From Layers of Fear then we add to our formula with The Observer, with dialogue choices, for example, the appearance of Rutger Hauer which was also great, then we took the external IP, of course talking about Blair Witch, to create something more and I think The Medium is like a leap for the studio, not a step but a jump, because we switch perspective to create a more cinematic experience, create a lot of cutscenes and stuff like this. So yeah, I think we are now trying to level up as a studio and enter new territories,” adds Piejko. Put Layers of Fear 2 into the mix, and The Medium is the fifth new release from the studio in as many years.

The Medium might be Bloober’s most recent title, but it’s been through a lot of iterations to get to its release, the team tells me. Having at one point been a platformer of sorts, and then a first-person title, to see the game finally make its way into the hands of players will undoubtedly be wonderful for the developers at Bloober.

Zięba agrees that The Medium is a big moment for Bloober. “Each of our games before it was like an evolution, yeah, we add on to what we had, and with The Medium it’s more like a revolution, and it was like a dream project for the company. It was in the making for a lot of years, the idea of course, and now we can, fulfill it, fulfill the destiny.” 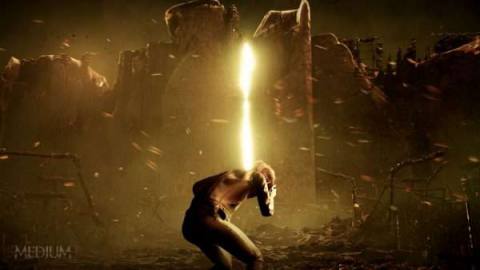 As a relatively unknown studio back in 2015, Zięba and Piejko can’t overstate the importance of creating quality games that move the studio forward.

“Each of the games opened doors,” says Zięba. “Layers of Fear opened one door, Observer, which let us work with some Polish actors and Rutger Hauer. I think without Layers of Fear that would have been impossible. And Observer opened the door to Lionsgate for Blair Witch and the first collaboration with Microsoft, and this opened the door for a big cooperation with Microsoft.”

“Microsoft, you know, have a great connection with us,” adds Piejko, “and when we showed them The Medium they say “oh cool, okay guys, this looks cool, this looks like something really different to our portfolio,” because I think they do not have any horror games right now and I think we perfectly fit into their portfolio plans.”

Zięba remembers the moment a fan recognised the studio’s work. “Once we were in the States, buying some phone cards or something, and a guy asked us “who are you?” We explained we’re game developers and what game we developed lately, Blair Witch, and he was blown away.” 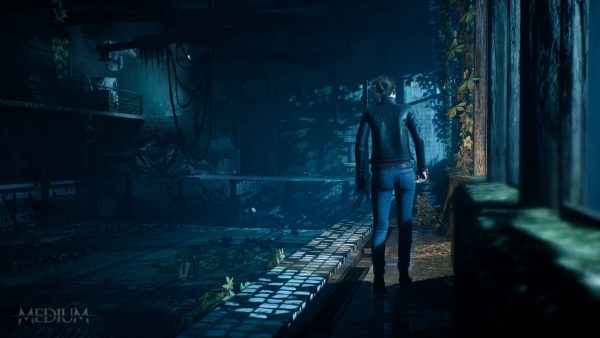 A modicum of fame hasn’t gone to the studio’s collective head. Piejko has a clear view of where the studio sits in the games industry landscape. “We are not thinking about our studio as a triple-A studio right now, yeah. We are lower than this, we know this. We know that we’ve got a lot of room to improve, to improve the mechanics in our games or other things. But yeah, I think we are good storytellers, you know, building the atmosphere, this is our main power and we are trying to build better games around it.” He then jokes that he’d love to get his hands on the tools Naughty Dog uses, calling them the “masters.”

Zięba agrees that the studio still has room to grow and achieve greater things and doesn’t know where the ceiling is. “I think we want to create the best stories in games that we can, and when we see something maybe above us, maybe it’s not the best choice to do it, but of course we want to still evolve, so we don’t know where we can end, where we can say “stop.”

A large chunk of The Medium’s development has taken place during a worldwide pandemic, something Piejko is clearly proud of the studio for overcoming, along with other obstacles that had to be hurdled. “We made the game during the pandemic with a lot of, you know, bad things happening during the development,” he says. “Creating the game with two words at the same time was really challenging for us because it was the first time when we don’t know what to do with some things, yeah. It was not like, you know, normal development like okay, I want Shooting mechanics, okay, let’s see how the best shooters are doing this, yeah, and you can, you know, reverse engineer something and design it. The Medium requires a lot of iterations, like a blind iteration sometimes, because okay, “what do we do with this?” and “I don’t know, let’s try this and this and this,” and we’ll see.”

“Creating The Medium was a leap into the unknown, like you know, to find new land in a way, and we found it, and we’re happy,” adds Zięba. 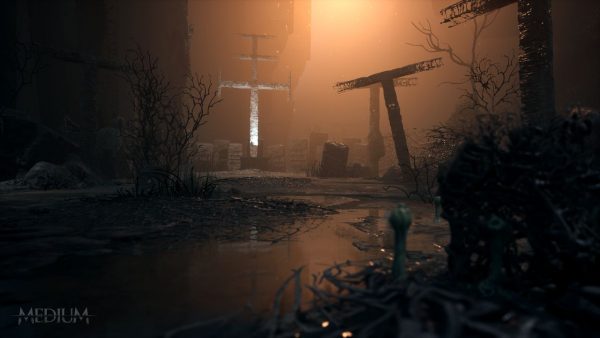 One might think that developing for a new console generation, in this case two consoles in the case of Xbox Series X and Series S, would have added to the studio’s problems, but thankfully this doesn’t seem to have been the case at all.

“With each generation of consoles, they’re still closer and closer to the PC,” says Zięba. “The structure and everything, so with new consoles and Xbox Series X and S, it was mostly a no brainer in a way, you know, like the engine is prepared for it and architecture is like normal, you know how this stuff works there, not like the PS3 or something. So no, it was a really pleasant experience, mostly.”

The pair agree that developing The Medium on older hardware might have been possible, but severely cut back, and to fulfil the vision it really had to be made on the new consoles and PC. But what of Microsoft’s less powerful Xbox Series S. Where does it fit into this reliance on next-gen power? The message from the team is clear: don’t worry about the small console’s relative lack of power.

“Yeah, I even played the whole game on Series S like one week ago and I was blown away because I thought I played on Series X,” says Zięba. “Somebody told me “man, this is Series S.” What! Awesome, wonderful. Of course, you know, there will not be 4K because S does not support 4K, and of course it will maybe look different a little to Series X because X is twice as powerful, but the overall experience and fun from the game, it is the same. I own the Series S and I can’t wait to play in my home.”

“Yeah, so the graphics are still nice because we’ve got a really cool graphic art style and I love the art style of the game. It’s in lower resolution, but it’s still the same great experience,” adds Piejko.

“The architecture of S, of this little while box, is just awesome,” says Zięba, before we move on to an altogether different, more powerful and expensive beast: The gaming PC. System specs for The Medium raised some eyebrows, but perhaps they shouldn’t have given that this is a game being built exclusively for next-gen hardware.

“You know, we are rendering two worlds at the same time, and if people want to render two worlds with HDR plus ray tracing, it requires really powerful hardware,” explains Piejko. “We don’t want to put the specs on the internet and say “yeah, it’ll run smooth on your card”, and for it not to be true. Our game flows between worlds, sometimes you are only in one world, sometimes in two at the same time. If you launch the game and at the beginning you only have one world, and then you will get to a two-word situation when the game renders two, you know frames will drop and of course it’s not good. We have to put the specs for the most power-demanding situation and that’s why the requirements are high.”

Thanks to a partnership with Microsoft, players won’t have to buy the game (although that’s still an option), with The Medium launching on Game Pass for Xbox and PC. It’s a service that Zięba believes offers great value to consumers and extends the reach of the studio’s games.

“Yeah, you know. It’s a double-edged sword in a way. You can have your game available to millions of players, the players have really good value for money, you can play a lot of awesome games,” says Zięba. “I know it’s not a streaming service because you still need to install the game (although streaming is part of Game Pass for certain titles) but it’s in a way similar to the Netflix approach. I think we all, consumers, developers, and other people don’t know how it ends.” If Zięba has a concern it’s that the service expands to have “too many games on the platform at one time.” Not that he believes this is a problem right now. “For now. for today It’s like, it’s awesome.”

Bloober finally gets The Medium out for people to play on January 28, so what’s next for the studio? Nothing is ready to be revealed yet.

“We never know,” quips Piejko. “It’s always like, okay, so what will be next? Maybe Observer 2 or maybe… we are always wondering. So we are not closing any doors, but right now we can only say that there will be darkness behind those doors.”

And what about the current Xbox console exclusivity? Will The Medium come to PS5, just as Blair Witch eventually came to PS4? “For now we are just focusing on Xbox and PC,” says Zięba. We’ll have to wait and see on that one.

The Medium launches on January 28 for Xbox Series X, Series S, and PC (Steam, Epic Games Store), and will be part of Game Pass for all those platforms.