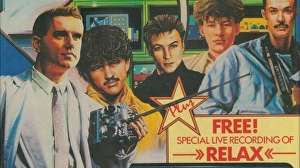 By early 1985, Liverpool pop band Frankie Goes To Hollywood could do no wrong. Having just released the fourth cut from their debut album, Welcome To The Pleasuredome in March, and with a new album incoming, the future of this stylish and overtly sexual group seemed assured. While the world of videogames was grasping the promotional power of riding on another property’s coat tails, a game focused on this most idiosyncratic of bands was hardly a natural fit. But that didn’t appear to worry Manchester software house Ocean.

At this time, Ocean was still using its favoured developers, Denton Designs, for many of its projects. Forged from the fallout of the collapse of Imagine Software the previous year, Denton Designs was swiftly establishing a reputation for original and inventive games. Everybody knew the band, and working on the Spectrum version was veteran coder John Gibson.

“[Frankie Goes To Hollywood] were famous at the time, so you’d have to have been a Martian not to have heard of them,” he says. For Liverpudlian Ally Noble, Gibson’s partner on Frankie, there was a bigger empathy for the group. “I’d seen them play at Larks in the Park in 1982,” she remembers. “They were the band to see, and I slightly knew two of the members from my old art school days. We also went to the same clubs – I remember dancing with Paul Rutherford at Jody’s.”