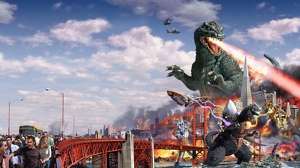 Finding new interests is an exciting thing. We get a taste, decide to further investigate, and before realising it, we’re down a rabbit hole. In a literal sense, mine was larger than most. Being gifted Godzilla: Destroy All Monsters Melee one Christmas day, it became my first experience with the King of the Monsters. Placing this iconic character into a 3D fighting game, Pipeworks Studio had a hit, and this soon became a trilogy. Godzilla Unleashed was a disappointing end but, Godzilla: Save The Earth? That was the real sweet spot.

Before I get into the game, it’s important to remember Godzilla’s historical context. An allegory for nuclear tragedy, he reminds us what such dreadful weapons can do, the impact it held on the Daigo Fukuryū Maru’s crew. Most entries contain a political message, but during the late Showa era, that point was lost amidst light-hearted storylines. When Toho started wheeling out alien invasions, champions of Seatopia and a cybernetic space chicken, it didn’t land the same way.

These later entries weren’t deep, but they brought us some cheesy entertainment. Who could forget Godzilla repeatedly drop-kicking a giant beetle. Melee brought these cheesy aspects on board, and in 2004, Save The Earth built upon it. There wasn’t much of a story, though it didn’t need one either. The Vortaak had returned, taking control of Earth’s monsters once more. Their goal? Obtaining G-Cells, Godzilla’s DNA. When G-Cells created known fiends like Orga and SpaceGodzilla, calling his genetics potent would understate matters.