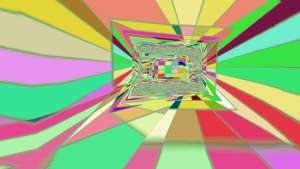 Like you, I have been surrounded by the same four walls for approximately one billion years now, entombed in a two-bedroom sarcophagus, hemorrhaging rent to an invisible overlord to maintain homeostasis in a world stood still. I’m convinced that, when I am asleep, these walls creep inwards by a few imperceptible millimetres, and that soon I’ll have to slowly squeeze through narrow hallways to get around, like my flat is perpetually loading the next area, until one Tuesday afternoon I am finally crushed to death.

The Catacombs of Solaris Revisited is incredibly indoors. It’s the most indoors I’ve felt since lockdown began. It’s a free-roaming kaleidoscope, a perspective-shifting maze with no exit and no entrance. As you explore, the shapes of corridors and corners become momentarily apparent, their edges made visible by the patterned walls skewing and stretching as you move around. When you stop or turn, the maze changes. Sections that were once open space become flat textures projected onto solid walls, like Wile E Coyote’s paintings of tunnels, or 3D chalk artworks on the pavement.

There’s no light or shadow to offer your eyes any clues as to the catacombs’ true shape, just the angles where the different textures seem to line up, and the illusory vanishing points suggested by the barely legible edges of rooms. There is no true shape. The credulous cubic inch of your brain responsible for creating mental maps is bamboozled every few steps you take, giving this visual toy the vibe of an unpredictable, psychedelic nightmare.