Assassin’s Creed Valhalla is out today, and as I mentioned in my review, it is a fascinating evolution for the series. One of my favorite changes is the game’s approach to skill selection, which gives players a vast array of options to gradually work toward, navigating a series of node clusters to unlock new powers. But which skills are the best? That’s going to be a matter of debate among the community, but based on my time with Assassin’s Creed Valhalla, here are some great options that are incredibly useful regardless of your preferred playstyle.

Here’s what you need to know first: Valhalla draws a distinction between “abilities” and “skills.” Abilities are gained by finding hidden books (and sometimes completing quests), and these are the things that you map to the face buttons for active use – usually during combat. Those aren’t what I’m talking about here. Instead, I’m focusing on skills, which are obtained exclusively by investing in Valhalla’s sprawling skill chart.

Skills encompass a broad array of active and passive capabilities, and you need to work your way toward them by gradually investing in nodes. But there’s a catch: The chart is covered in fog when you start the game, so you don’t necessarily know what all the cool options are, or how to work toward them. That’s why, for all of the skills below, I’m also showing you their relative location on the chart. Don’t worry if it looks overwhelming at first; all you need to know is that you start at the center, and the whole screen is split into thirds, with red at the top, yellow to the left, and blue to the right (see image below). For example, if a skill is shown to be on the border between the red and blue sections, you know it must be in the upper-right region of the chart, since that’s the only place those areas intersect. The colors fill in as you go, so any gray nodes are just things I didn’t purchase in this particular build.

One last important note: You can refund individual skills at any time at no cost. You can use this to your advantage when unfogging the skill chart; if you spend enough points to clear the fog from a nearby cluster of nodes but don’t like what you see, you can immediately refund those points to spend them elsewhere. Plus, the fog remains cleared (at least until you reload your game). Okay, with that context, you shouldnow be able to start unlocking your way to these skills in no time. 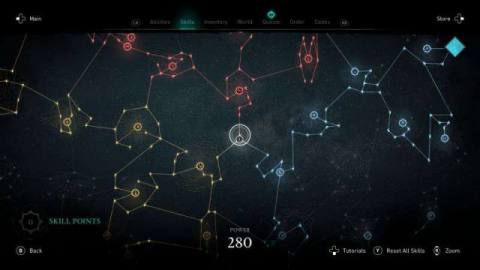 Each section of the skill chart has a vague focus (yellow is stealth, red is melee, and blue is archery), but the available nodes frequently blur the lines between those distinctions. That makes it tough to know where you might find something useful – so let me help take away some of the guesswork. All of the skills below increase your effectiveness and efficiency, and they are widely applicable to the many situations you encounter. If you prioritize these skills, you can’t go wrong. And you’ll probably pick up other good ones along the way. 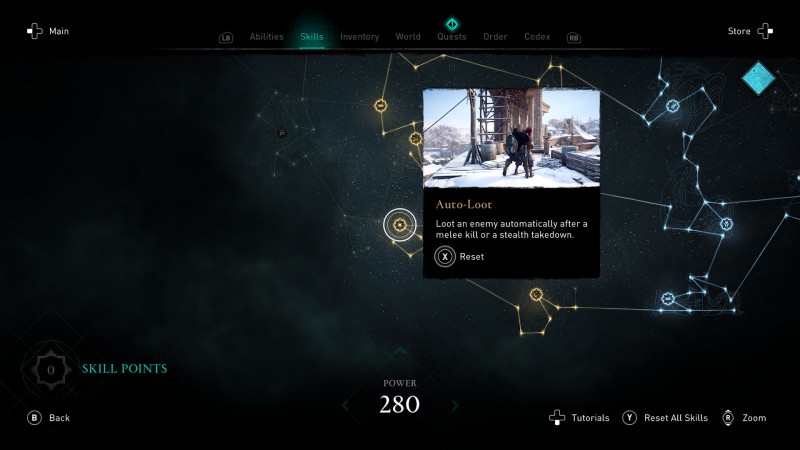 Enemies in Assassin’s Creed Valhalla have tons of stuff you want. Whether it’s crafting materials or the key to a nearby chest, you need to loot lots of bodies to maximize your gains. That’s where auto-loot comes in extremely handy. You automatically take anything valuable from your enemies when you kill them with melee attacks, which negates the need to run around in circles after a heated battle to manually loot every fallen foe.

Adrenaline is what you use to fuel your abilities, so having more of them means that you can unleash more consecutive special moves to control the battlefield. You earn one adrenaline bar automatically, but three more are waiting to be found. These are absolute no-brainers, because Eivor can always use more adrenaline for sneaking, shooting, and slashing. Cycle through the images above to see all three locations. 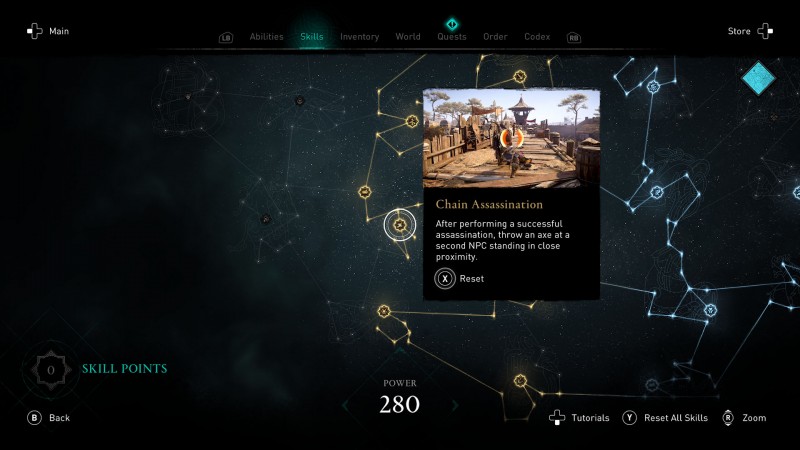 Let’s say you silently take out a guard, but another one nearby is just about to turn around and detect you and blow your cover. That’s why you want these skills. Chain Assassination lets you score a second stealth takedown (from a distance!) after successfully pulling off a sneak attack. Just a few nodes to the right (covered up by the box in the image above) you’ll find Advanced Assassination; that skill lets you get one-hit kills on most targets who are normally too strong to be taken out that way – you just have to finish a quick and easy timed minigame. The combination of these two abilties often means the difference between escaping undetected and alerting the whole town guard to your presence, which can save you a lot of time and hassle. 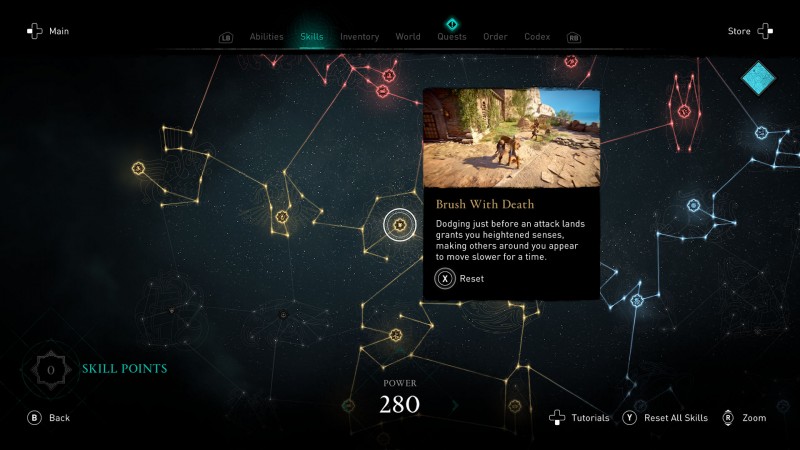 Combat in Valhalla can have a free-for-all sensation, with blows coming at Eivor from multiple directions. You need to take advantage of your openings when you can find them, and that’s what this skill is for. It slows down time after a close-call evade, giving you a brief opportunity to position yourself for the perfect counterattack. 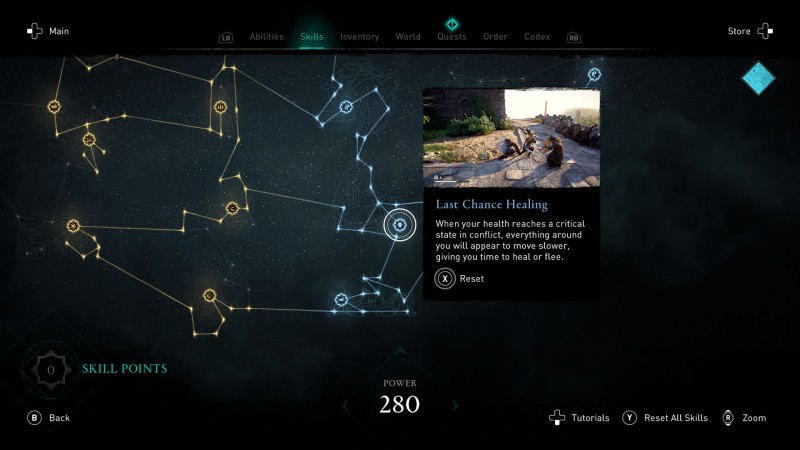 Even if you’re a god on the battlefield, you’re going to get hurt. Arrows, axe-swings, and fall damage can add up. Last Chance Healing is worth unlocking because it ensures you are able to keep fighting. It gives you a helpful grace period when Eivor is about to die, allowing you time to use one of your health-restoring rations rather than meet an inglorious end. 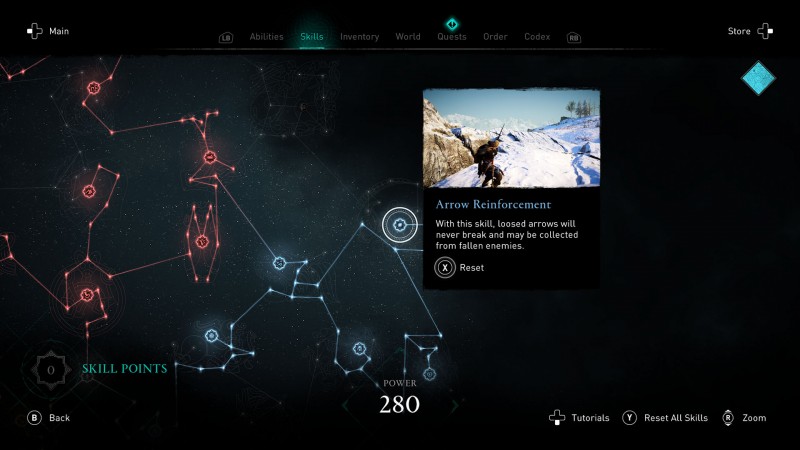 Even if you don’t specialize in archery-related feats, you’re still going to need your bow and arrow. Whether you’re assaulting a fort or taking careful aim at a window, having a healthy supply of arrows on-hand is a good idea. This skill ensures that almost every arrow you fire can be recovered, so you aren’t left with an empty quiver in critical situations.

Of course, these aren’t the only skills worth unlocking in Assassin’s Creed Valhalla. You’ll find plenty of other worthwhile options as you progress. If you want even more guidance for Valhalla’s massive Viking fantasy, be sure to read our spoiler-free tips for starting the game.