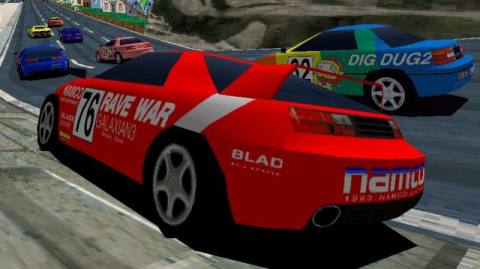 There are some games whose first encounters with you’ll always remember. For me – and I’m sure for many others – it’s Ridge Racer. First contact was made the summer of 1994 in a Hastings arcade, a whole week spent pushing 20p pieces into a machine that felt like it had been transported from some shiny new future (later that same week I’d get laughed out of a seafront dance record shop when I asked if they had any copies of Shinji Hosoe’s incredible soundtrack).

And then, six months later, there was the future shock of seeing this phenomenal thing running in a friend’s living room on a Sony PlayStation that had been imported from Japan at great expense. The arcade had properly made it home, and it started a tradition of PlayStation hardware being christened with a sterling new racer from Namco – Ridge Racer V! Ridge Racers! Er, Ridge Racer 7 maybe? – that was sadly broken by the launch PlayStation 4, and we’ve been waiting for a proper new entry ever since. Oh how I miss those razor-sharp slides, those fictional sports cars that teetered on the edge of sci-fi with their outrageous designs, those thumping beats and dizzying synth lines of its turbocharged techno.

Arcade racers haven’t gone anywhere – indeed, we’ve had something of a resurgence recently – but games as stylish and slick as Ridge Racer? That’s something that’s sorely missed. So too is the future shock that Ridge Racer provided at the dawn of the PlayStation generation, and for all the pizazz of the PlayStation 5 and Xbox Series X, it’s something that’s missing a little from both launch line-ups. And that’s what made Ridge Racer so special. It wasn’t just a great launch title – it felt like an entire paradigm shift.