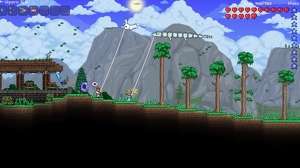 Terraria has reportedly sold more than 35 million copies across all platforms.

Developer Re-Logic confirmed the milestone in an update on the official forums, which also revealed the game had now beaten Portal 2 to become Steam’s highest-rated game of all time according to gamer reviews on external website, Steam250.

The game remains most popular on PC, where it’s clocked up 17.2 million copies sold – that’s about half of all sales thus far. 9.3 million copies have been sold on mobile devices, while 8.5 million of us are playing Terraria on a console.