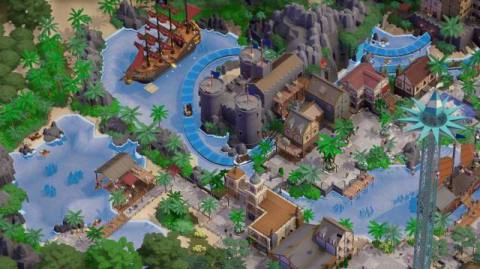 Parkitect is already a gloriously designed thing, successfully managing to deliver a soothing nostalgia fix for Rollercoaster Tycoon fans, while still introducing some wonderfully impactful innovations at the same time – including powerful construction tools and smart gameplay additions such as a focus on intra-park delivery infrastructure – that breathe new life into the classic building and management formula.

Texel Raptor’s latest addition, however – which follows on from two paid DLC expansions – is the game’s most significant endeavour yet, offering the kind of collaborative multiplayer building experience that’s frequently requested by fans but rarely seen in the genre.

When Parkitect’s multiplayer update launches, player will be able to start an online game via the new lobby system (Steam friends can be invited directly), with up to 8 players able to work together to create the theme park of their dreams. And as new pieces and props are plopped down, everyone’s changes will be visible in real-time.

Parkitect’s multiplayer mode will arrive in a free update on 8th December, and if you’ve yet to experience the joys of the base game, it’s currently discounted by 25% in the Steam sale, bringing the price down to £17.84. Additionally, there’s 27% off the deluxe bundle, which includes the base game and both DLCs for £28.37.