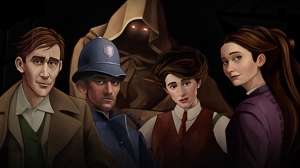 Failbetter Games, the developer behind the likes of Sunless Sea and Sunless Skies, has revealed it’s currently working on two new titles, one of which is a visual-novel-style prequel to its acclaimed browser game Fallen London.

Fallen London, which celebrates its tenth anniversary this year, unfolds in an alternate-universe Victorian London that was stolen by bats and carried beneath the planet’s surface, down into a vast underground cavern system known as the Neath.

Failbetter’s next game, titled Mask of the Rose, takes place in 1862, shortly after London’s move underground and around three decades prior to the events of Fallen London and Sunless Sea. It’s a somewhat different proposition to other games in the series too, being pitched as a “romantic visual novel” – albeit one that retains Failbetter’s darkly irresistible gothic wit.