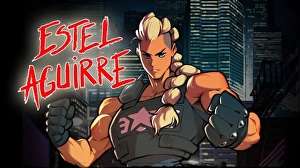 The beat ’em-up, which has sold an impressive 2.5m copies, is also getting a new mode and new customisation options.

Estel Aguirre is one of the three new playable characters. She appeared in the game as an intimidating, boss fight-style foe. The video below shows Estel as a playable DLC character. There’s also a hint at the DLC’s two other characters yet to be revealed.