Some people regard maker machines as an industrial intrusion into a rural idyll. But whatever your opinion of them, makers are a key aspect of Story of Seasons: Pioneers of Olive Town, allowing you to transform raw materials into processed crafting items.

The first maker machine you’re likely to encounter is the Lumber Maker. It’s used for refining logs into lumber, and is essential for performing the many repairs to your grandfather’s broken-down farm that are necessary right from the start of the game.

How to unlock the Lumber Maker in Story of Seasons: Pioneers of Olive Town

In order to unlock the Lumber Maker crafting recipe, you’ll need to reach Level 2 of the Logging Skill. Fortunately, this is quite easy to do.

Upon your arrival in Olive Town, Mayor Victor will welcome you with a set of farm tools that includes an axe. The overgrown old farm you’ve inherited from your character’s grandfather has definitely got too many trees growing up around it, so get to chopping as soon as you’ve finished the introductory cutscenes.

Skill unlocking in this game is very generous in the early stages, so you should reach Level 2 long before you run out of trees. 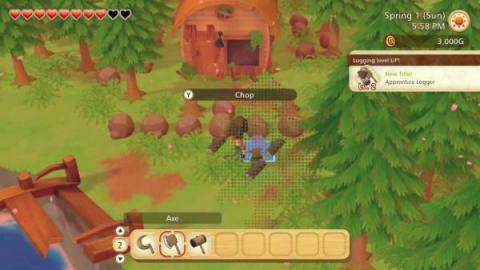 This will give you access to the crafting recipe for a Lumber Maker, though the game won’t actually tell you so at this point.

Instead, at the beginning of Day 3, Mayor Victor will return to your farm with local carpenter Nigel in tow. Nigel dispenses his wisdom, drawing your attention to the Crafting Tab and explaining the Maker system.

How to craft the Lumber Maker in Story of Seasons: Pioneers of Olive Town

You’ll need 20 logs in order to craft the Lumber Maker. You don’t need any tools or workbenches to craft in this game. It’s done directly from the Crafting tab in your Notebook.

Once crafted it’ll be in your inventory; from there, you need to place it on the ground on your farm. There are a few restrictions, in addition to its 2×2 tile space requirement: it needs to be placed outdoors, on grass, and can’t be put down in the fenced-in area immediately surrounding your home. 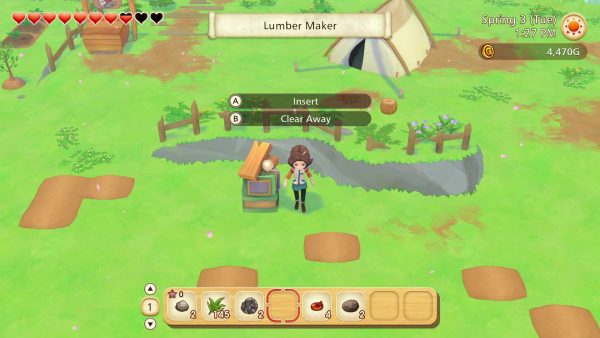 You can place up to 20 lumber makers on your farm at a time. Since they take two in-game hours to process a single piece of lumber, it’s definitely worth having multiple makers of the same type, if you can spare the space.

Maker machines in Pioneers of Olive Town aren’t upgradeable in the ordinary sense. However, reaching Level 10 in the skill linked to each maker will allow you to craft a new, giant version of that machine.

Keep chopping down trees and eventually you’ll hit Level 10 of the Logging Skill. At that point, you’ll be able to craft a Giant Lumber Maker — though you’ll need a hefty set of resources with which to do so. You’ll need:

Giant maker machines, as the name suggests, take up more tiles than their regular-sized equivalents (2×3 as opposed to 2×2). You’re also limited to a maximum of five giant lumber makers on your farm, whereas you can have 20 regular-sized lumber makers in operation at a time. However, they do produce one-and-a-half times the yield for the same raw material input.

Using the Lumber Maker in Story of Seasons: Pioneers of Olive Town

Interact with the Lumber Maker and a pop-up menu will appear. This shows all lumber types that can be produced with the logs currently on your person. If you don’t have enough logs to produce lumber, the option will be greyed out. 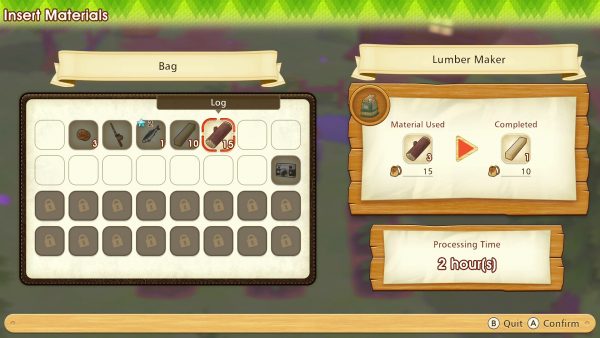 The exchange rate — that is, the number of raw logs you need to feed into the Lumber Maker to produce processed lumber — is around three to five logs for one piece of lumber, depending on variety. It takes five regular logs to make lumber, but only three mirage logs to make mirage lumber, for example.

How to get logs to use in the Lumber Maker

There are five kinds of trees in Pioneers of Olive Town. Chopping them down with an axe gives you different varieties of logs. Each log type produces its equivalent lumber type by being processed in the Lumber Maker.

There are visual differences between each type of tree, but they’re very subtle. Look carefully to make sure you’re chopping down the right variety of tree! 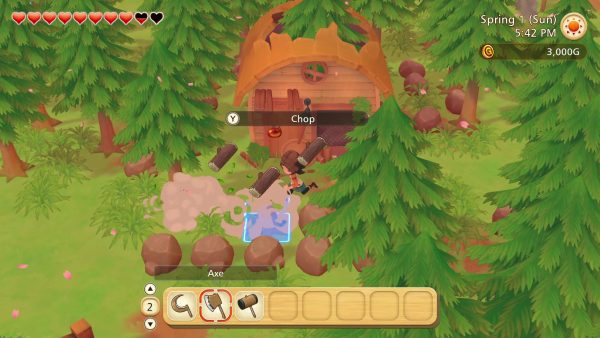 Regular logs come from the trees that surround your farm from the very start of the game. They have light coloured bark, downward-pointing branches, and a six-pointed base.

You’ll be able to get solid logs after you repair the broken bridge that’s blocking access to the second area of the farm. These trees have very slightly darker bark, upward-pointing branches, and a five-pointed base. 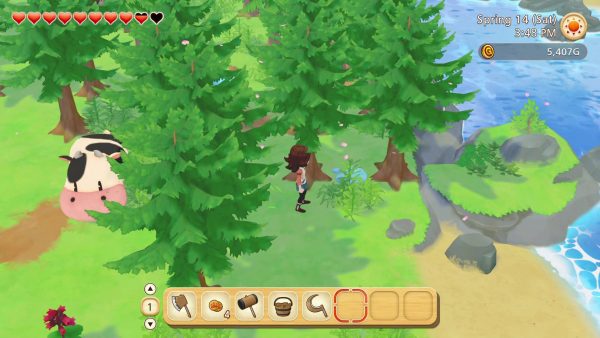 This area also contains mirage trees, though they’re very rare. Specifically, all trees that spawn on the outcrop around the dilapidated Hydroculture Plant will be mirage trees (regardless of appearance). There’s not a lot of space for them there, so only expect three or four at a time. Luckily, recipes that require mirage logs don’t tend to call for very many of them.

The post Story of Seasons: Pioneers of Olive Town Lumber Maker | How to unlock and use appeared first on VG247.