In Story of Seasons: Pioneers of Olive Town, you’re frequently asked for advice on how to make Olive Town more appealing to tourists.

One of these requests involves you choosing a mascot for the town.

How do you choose a mascot in Story of Seasons: Pioneers of Olive Town?

The choice for me came on Day 10, a couple of days after I’d completed the first Town Request from Mayor Victor. Completing the request and waiting a day or two seems to be the trigger for this choice, rather than the date itself.

By the time you reach this point, you’ll also have been asked for your advice on improving tourist facilities and invited to admire the new road you helped to build, so you’ll be familiar with the dialogue choice format.

Upon entering Olive Hall for the first time that day, you’ll trigger a cutscene. Victor will begin by giving you an ultimately meaningless choice between three town development plans, but that’s not what he really wants to talk to you about today. 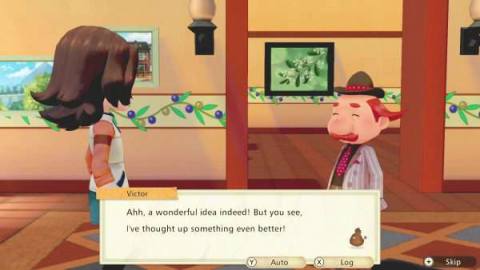 Victor will explain that his latest idea for improving Olive Town’s image is to create a town mascot. He’s come up with three options, and just needs you to choose between them.

Option 1 is a cow, to celebrate the town’s farming history and its desire to present itself as a rural idyll.

Option 2 is a dolphin, to promote the town’s desirable proximity to the ocean.

Before Victor can tell you what the final option is, his son Jacopo unexpectedly returns early from work. Jacopo excitedly volunteers himself for the role of town mascot, and although Victor objects that he hasn’t told you what your last choice is yet, he reluctantly agrees to press on with Jacopo as Option 3. 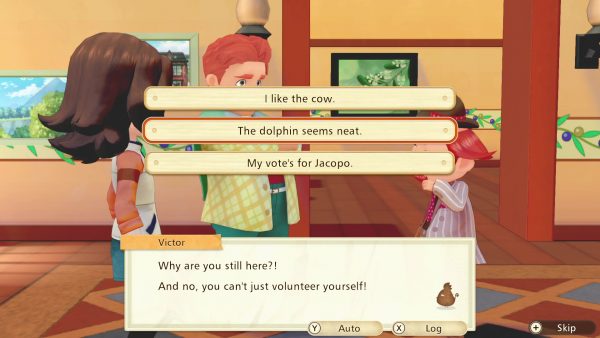 What is the outcome of your choice?

No matter your choice, Victor unenthusiastically promises to honour your decision. However, all may not be as it seems. 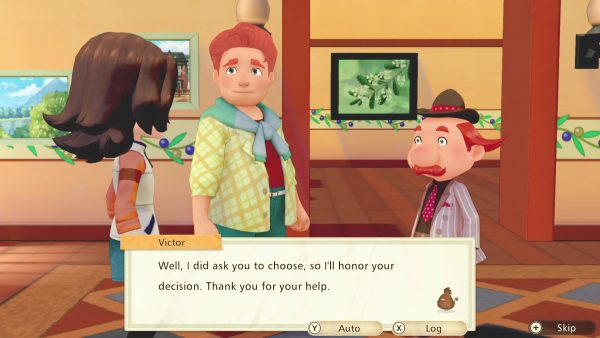 At around this point in the game you’ll receive other similar decisions (such as being asked to pick an architectural style for the museum renovations) that end up in the same outcome no matter what you pick. The effects of these choices won’t be immediately obvious, though, as the changes you were consulted on aren’t made straight away.

But bearing in mind that retail special editions of Story of Seasons: Pioneers of Olive Town will be accompanied by a plushie of the game’s mascot Buffy the Buffalo, it seems like Mayor Victor is set to go rogue on this decision.

#STORYOFSEASONS fans rejoice🎉@XSEEDGames has announced retail editions, featuring a special ‘Premium Edition’ for STORY OF SEASONS: Pioneers of Olive Town that will include an adorable pocket plushie of title mascot “Buffy” the buffalo! #SOSPOOT https://t.co/mnbGWY6eF9

The likelihood that Buffy was Victor’s third and preferred choice all along seems very high. As of yet it’s unclear at which point the mascot actually appears in the game, but when they do, it’ll probably be Buffy. We’ll let you know if we find out otherwise, but for now, it doesn’t seem like this dialogue choice has much impact on the game going forward.

If you’re looking for ways to make more meaningful change to Olive Town, why not check out our guide on unlocking all the tools you’ll need to renovate your farm.

We’ve also taken in-depth looks at how to find all the tree types in the game and how to process logs using the Lumber Maker!

The post Story of Seasons: Olive Town mascot | Which mascot should you choose? appeared first on VG247.