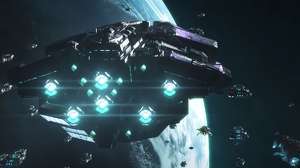 Sci-fi strategy game Stellaris’ latest expansion, Nemesis, will be making its way to PC on 15th April, and the Lithoids Species Pack is coming to PS4 and Xbox One on 25th March.

Nemesis, as its name suggests, finally lets Stellaris players properly embrace their dark side by giving them the opportunity to initiate a crisis. Usually these are late-stage events that mark the arrival of powerful AI forces who’ll either perish in bloody battle or eradicate all known life, but Nemesis will let human players mastermind the galaxy’s devastating denouement themselves.

First, however, they’ll need to perform nefarious deeds and accrue Menace, which is used to ascend through the ranks of evil, eventually unlocking the Aetherophasic Engine – a doomsday device powered with the dark energy created by consuming the stars.