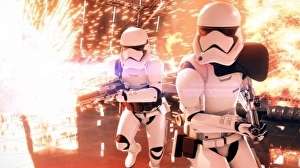 As we reported last week, Epic’s current freebie – the Celebration Edition of Battlefront II – features all the post-launch additions, as well as all cosmetic content previously available as in-game purchases, right up to and including those released as part of the game’s Rise of Skywalker update.

However, since the freebie was launched many players have had problems connecting to the online servers, reporting error codes 623, 918, and 721 – all of which translate to server issues.