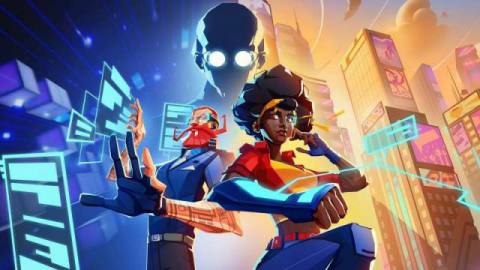 2021 has been a relatively slow year so far in terms of releases which is why we’re always happy to see new games on the horizon, big or small. Today, Sony rolled out the red carpet for a  selection of upcoming indie games heading to both PlayStation 4 and PlayStation 5. Some are brand new, others we already knew about and were updated with release dates and new trailers (such as Disco Elysium: The Final Cut). Here’s a round-up of Sony’s indie announcements.

Operation: Tango is a unique asymmetrical co-op game we first learned about last year. What we didn’t know then is that the game is coming to PS5 and features cross-play with PS4. Two players assume the roles of Angel, a secret agent, and Alister, a hacker who must work together to infiltrate and explore various maps. Since Angel is on the ground, her view of an area is much different than Alister’s, who can only see a digital variant of it. Thus, players must verbally communicate in order to successfully navigate the world and help each other out. While Angel physically explores the world, Alister is busy hacking security systems and gathering information to make Angel’s life a lot easier. Scenarios include high-speed chases and break-ins, all in the name of saving the near-futuristic world from peril. It’s a neat idea with a lot of style, and we’ll see how the mission concludes when Operation: Tango launches sometime this spring for PS5, PS4, and PC.

This adorable title arrives this spring and comes from Finji. Players are bestowed with a magic paintbrush used to bring color to the coloring book-like world. The fun mechanic also has traversal and puzzle-solving applications, like placing objects to cross gaps or creating a river of color to swim across ala Splatoon. Players can draw on anything and decorate areas with objects, and whatever you create remains persistent. You can revisit old areas and find your custom creations still intact. Chicory is all about letting players unwind and minimizing frustration. For examples, players can use an in-game phone to call their mother for reminders on the task at hand and specific directions to their next goal. Much like indulging a real coloring book, Chicory: A Colorful Tale looks like the perfect creative chill pill. It launches this Spring for PS4 and PS5 as well as PC.

Nour: Play With Your Food

Any toddler or rambunctious high-schooler will tell you that playing with your food is as fun as eating it, and Nour let’s player do it in style. This strange title lets players sling around various dishes by not only pressing buttons, but also blowing into the DualSense microphone as well as singing into it. An adaptive soundtrack matches beats and tones to the food on screen. Introduce a slice of bread, and you’ll add another musical element, like a flute or a piano. The idea is that you’re creating music and playing through various rhythm sequences. It’s a goofy game, and it’ll be served up to PS5 and PC players this summer.

Where The Heart Leads

We last heard from Where the Heart Leads back in December, we now know the surreal adventure game is heading to PS5 as well as PS4. Best of all, we got a release date: July 13. The game comes from Armature Studios and centers on a man who gains the ability to revisit and alter key moments of his life. Expect to make a lot of big decisions that will not only impact you but your friends and family too. The game sports a number of branching paths, so at least you’ll be able to take different paths in future playthrough if your choice don’t pan out the way you hoped.

PlayStation VR owners itching for some VR-puzzle-solving have this to look forward to. The game is best described as a 3D jigsaw puzzle. Players assemble pieces of fully 3D landscapes, like boats, castles, and entire city squares. Since the game involves a lot of rotating perspectives, it’s a perfect fit for VR. Puzzling Places has been available on Oculus and comes to PSVR this winter.

We’ve known for a while that Heavenly Bodies is about wrangling two cosmonauts though a physically simulated, zero-gravity space station. What we didn’t know was how the actual game played out, but we got a clearer idea in a new trailer. By manually controlling each limb, players must find a way to assemble satellites to establish contact with home base. We also see the pair of explorers also work together to somewhat awkwardly pilot a craft used to drill into asteroids. Since you’re trying to fight against weightlessness to get things done, Heavenly Bodies lends itself to some goofy fun. We still don’t have an exact release date but it’s scheduled to arrive later this year for PS5 and PS4.