It’s taken two years, but the incredible Sonic the Hedgehog Lego set we reported on back in 2019 has finally been approved – it will become a real Lego set.

It’s official – Sonic the Hedgehog will get its first Lego set in the near future. The fan-made idea for a Lego product was today revealed to have been picked to become a real set, yet another video game franchise making that leap via the Lego Ideas program. 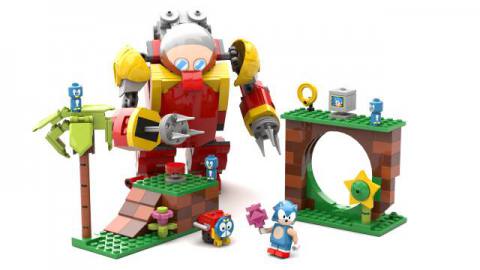 If you’re unfamiliar with Lego Ideas, it’s an online initiative run by the Lego Group designed to engage with the more hardcore side of the Lego fanbase. Fans can design their own sets and submit them online. They’re then voted on by other Lego nerds – and any set that reaches a threshold of 10,000 fan votes is then sent up to the official product review board at Lego proper. Anything that passes review becomes a real Lego set.

Ideas has been home to some brilliant sets including original efforts like a functional pop-up book and an intricate ship in a bottle through to dream licensed sets for franchises like Back to the Future, Ghostbusters, Doctor Who, Adventure Time, and the Flintstones. Minecraft, which is now its own independent and unique Lego brand, saw its first release as a tiny Lego Ideas set.

Sonic’s approval as a fully-fledged Lego set of course follows on from Mario’s debut as a Lego range last year. Whereas Mario’s sets are generally original sets based off the games and with an interactive Mario figure and mobile app, however, this Sonic set is a more traditional Lego product. Based off Sonic Mania, it features Sonic in a mildly modular version of the Green Hill Zone, some Badniks, Flickies, plus Doctor Robotnik and his Death Egg Robot from Sonic 2. Broadly speaking, the set is based off the first level of 2017’s throwback triumph Sonic Mania, which features all of these elements in its version of Green Hill Zone.

The way Lego Ideas works means that the set you see pictured here won’t necessarily be the final product. At this stage, Lego brings the design in-house and sets their official full-time designers loose on it. They’ll work with the original fan designer, the suits that decide set size, pricing and budgets, and of course with Sega, as rights holder, to determine a final release. It might ultimately be quite different. Regardless, a Sonic Lego set is coming!

Sonic has actually appeared in Brick form before, featured as a level and character inside the Lego Dimensions video game. This included a Sonic minifigure – but now he’ll have a game accurate world and foes to face.

This isn’t the end of video games on Lego Ideas, either. An Animal Crossing set was sadly rejected in this same review, and sets based off The Legend of Zelda and Metroid just entered the review process last month. Here’s hoping some of those get approved – we’re making strong inroads to a Lego Smash Bros, here.

The post Sonic the Hedgehog is getting an official Lego set appeared first on VG247.