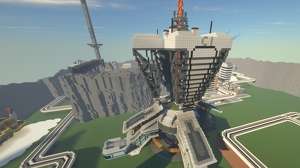 It seems like people really do have a lot of spare time on their hands in lockdown, as an Apex Legends fan has recreated most of the enormous World’s Edge map in Minecraft. And multiple weapons and legend abilities for good measure.

In a post on Reddit, Japanese player kurobekuro shared some images of their work so far, and although the World’s Edge map is unfinished, it’s still pretty impressive. Finished locations include Harvester, The Train Yard, Mirage Voyage and The Epicenter (complete with massive protruding icicles), and they look remarkably similar to the real deal. Or similar to what Apex Legends will look like on Switch, perhaps.

Along with the locations, kurobekuro also reproduced two Apex Legends weapons – the R99 and Flatline, which appear to be fully operational. The player also made several legend abilities, including Octane’s jump pads, Wraith’s portals and Bloodhound’s Beast of the Hunt ultimate. And although I’m not sure the latter would actually help you spot people, the noise it makes is just as terrifying as in the game. Make sure to check out the videos of these on the original post.